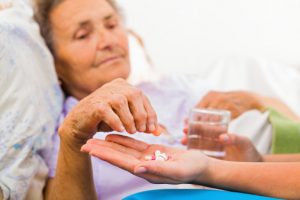 The trial focuses on treatment to reduce the impact of amyloid proteins. The researchers used positron emission tomography (PET scans) and found that beta-amyloid begins forming in the brain of Alzheimer’s patients one to two decades prior to visible symptoms. Researchers believe it is this accumulation of beta-amyloids that contribute to memory loss.

Researchers used an investigational drug, which targets beta-amyloids in the brain. Researchers wanted to determine if the drug could delay cognitive decline and memory loss in those who had yet to receive a diagnosis of Alzheimer’s disease.

Joseph Masdeu, Ph.D., from the center said, “It is encouraging to be able to detect excess beta amyloid with PET technology in people predisposed to Alzheimer’s and then try to lower the amyloid levels with solanezumab [investigational drug]. However, there appears to be a point in the development of Alzheimer’s where removing beta amyloid does not reverse or stop disease progression because too much abnormal tau has been generated by then. That is why it is important to use PET to measure the amount of abnormal brain tau as well.”

Estimates reveal that every 67 seconds a case of Alzheimer’s develops and by 2050 16 million people will be affected by it.

Masdeu continued, “Among the major causes of death in the United States, Alzheimer’s is the only one that we currently cannot prevent or cure. We hope that slowing the onset of Alzheimer’s will help patients hold on until a prevention or cure can be found.”

Study participants will be in the age range of 65 to 85 without a diagnosis of Alzheimer’s disease. Researchers are expecting nearly 1,000 participants across the U.S., Canada and Australia. The study will go on for three years.