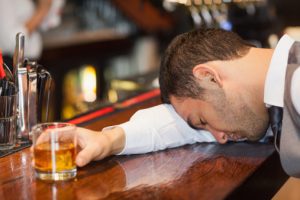 The consumption of alcohol has become an integral part of social society. We drink it at various gatherings, use it as an ice-breaker for meeting new people, and studies have found it has many beneficial effects.

What most people do not want to admit is that this popular beverage has many negative effects in the long-term. Excessive alcohol consumption can lead to liver disease, heart disease, and even strokes. Now, a new study shows how alcohol damages DNA in stem cells, helping explain why drinking increases your risk of cancer.

Scientists at the MRC Laboratory of Molecular Biology, Cambridge used mouse models to show how alcohol exposure can lead to permanent genetic damage. Chromosome analysis and DNA sequencing were used to identify genetic damage caused by a harmful chemical that is produced once alcohol is consumed called acetaldehyde.

Acetaldehyde was found to break and damage DNA within blood stem cells, which led to the rearranging of chromosomes and the permanent alteration of the DNA within these cells. It is this occurrence that can lead to the development of various cancers.

The researchers suggest that these findings show how drinking alcohol increases the risk of developing seven types of cancers, including the most common types affecting us today: breast and bowel.

“Some cancers develop due to DNA damage in stem cells. While some damage occurs by chance, our findings suggest that drinking alcohol can increase the risk of this damage,” said the lead author of the study Professor Ketan Patel.


The body attempts to protect itself

While learning that drinking alcohol essentially increases the risk of cancer can be disheartening, the study also examined how the body tries to protect itself from this type of damage. Enzymes called aldehyde dehydrogenases (ALDH) break down harmful acetaldehyde into acetate, which our cells can use as a source of energy. However, millions of people worldwide either lack these enzymes or carry faulty versions of them.

Mice lacking such protective enzymes resulted in four times as much DNA damage in their cells compared to mice that had fully functioning ones.

“Our study highlights that not being able to process alcohol effectively can lead to an even higher risk of alcohol-related DNA damage and therefore certain cancers. But it’s important to remember that alcohol clearance and DNA repair systems are not perfect and alcohol can still cause cancer in different ways, even in people whose defense mechanisms are intact,” added professor Patel.

Alcohol consumption is thought to contribute to over 12,000 cases of cancer in the UK each year. Cutting your drinking, or abstaining from alcohol altogether, may be a good idea.

What is the life expectancy of someone with alcoholic cardiomyopathy? Causes, symptoms, diagnosis, and treatment