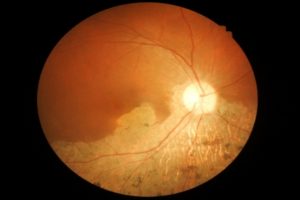 Age-related macular degeneration (AMD) and macular telangiectasia may be caused by dysfunctional energy metabolism. Both eye diseases develop from abnormal growth of blood vessels in the eye, which is believed to be triggered by oxygen deprivation. Now the researchers suggest another cause, dysfunctional energy metabolism in the eye, resulting in insufficient energy resources available for the light receptors in the retina.

Senior investigator Lois Smith explained, “They have the highest concentration of mitochondria — the “furnace” of the cell — and use more energy than any other cell in the body. They have to be ‘on call’ all the time to signal light perception and have to recycle their components constantly.”

To explore the resulting fuel starvation, Smith created mouse models in which fatty acids were manipulated so that photoreceptors were unable to get either lipids or glucose. “When blood lipids are elevated, the lipid sensor says, ‘we don’t need glucose, we have enough lipids here,’ and it shuts off glucose uptake inappropriately,” Smith explained.

VEGF blockers can be used to treat AMD but are associated with certain side effects. The researchers will now explore whether people have lipid sensors similar to those in mice. If this is the case, existing inhibitors could be tried in clinical trials.

Age-related macular degeneration (AMD) in its early stages may be reversed with laser treatment. Researcher Erica L. Fletcher explained, “It is hoped that this study will provide a basis for the clinical use of the low energy nanosecond laser in those with early stage age-related macular degeneration and that such a treatment will limit the progression of the disease to the advanced, sight-threatening forms.”

The researchers treated patients with AMD in one eye with a single session of nanosecond laser treatment. Participants underwent eye exams every six months for two years after the treatment. Patients were then compared to another group of AMD patients who were untreated.

The results demonstrated that treating AMD with laser early on has limited the progression of the disease. The nanosecond laser did not cause any damage to the retina (the tissue at the back of our eyes that contains much-needed light-detecting cells) and it was shown to even have positive effects for the untreated eye as well.

In another study, researchers found that unlike other laser treatments, this low-impact, low-energy kind of nanosecond laser is not likely to damage the retina.

Laser surgery is typically used as a treatment to seal leaking blood vessels caused by AMD, slowing down the loss of central vision. The dry form of AMD causes a gradual breakdown of light-sensitive cells in the retina, and this may not affect vision significantly.

The wet form, however, occurs when abnormal blood vessels grow under the retina. These vessels then leak blood and fluid, eventually causing scarring. When this happens, vision loss can progress quite quickly.

Both hot and cold laser therapy are used to treat wet AMD. Hot laser treatment seals blood vessels that abnormally leak in the retina, which prevents their growth. On the other hand, a cold laser can destroy the new, leaky vessels without ever affecting normal tissue.