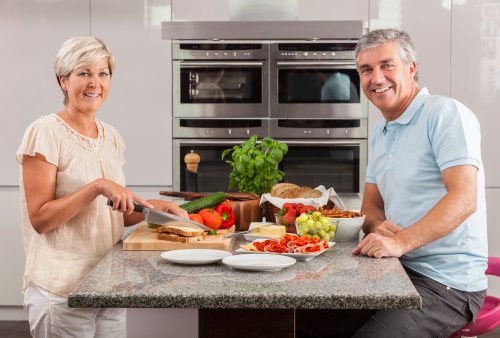 There are certain aspects of our lives that most of us assume we have to give up on as we age. Unfortunately, sexual health is one of them. However, a recent study has revealed a way to help preserve and improve the sexual health of older men, that could make them just as virile as healthy men who are much younger. And not only has this been shown to boost the sexual health, drive, sperm health and healthy reproductive functions of older men, but it could also help to significantly boost many aspects of men’s  health over all.

The Secret to Good Sperm Health

A group of 80 healthy male volunteers between the ages of 22 and 80 years were analyzed by scientists at Berkley University. The scientists found a clear correlation between the consumption of vitamin C and sperm health. Men over the age of 44 who consumed the most vitamin C had 20 percent less sperm DNA damage than men of the same age who consumed the least vitamin C. Similar results were found when testing vitamin E, zinc, and folate.

Published in the August 27th issue of the online journal Fertility and Sterility, the study found that men over the age of 44 who consumed the minimum recommended amount of certain micronutrients had similar sexual health to that of younger men with the same micronutrient consumption.

Andy Wyrobek of the U.S. Department of Energy’s Lawrence Berkeley Lab’s Life Sciences Division, says that consuming more micronutrients such as vitamin E and C, zinc, and folate appears to have a positive impact on sperm health. This research shows that men with declining sexual health can, in fact, improve their sperm health. All it involves is ensuring that you are getting an adequate intake of vital vitamins and micronutrients in your diet, through a combination of a healthy diet and dietary supplements.

Previous research conducted in Wyrobek’s lab found that older men were more likely to have damaged sperm DNA. Older men are also more likely to have a higher frequency of sperm carrying genetic mutations, such as those leading to dwarfism. These findings go a long way in explaining why aging men are less fertile and are predicted to have more genetically abnormal pregnancies.

Until now, researchers haven’t understood how or why diet can protect against the detrimental effects of aging on sexual health. The study found that even the participants who classified themselves as healthy consumed much less than the recommended dietary allowances for many of micronutrients. This why a diet rich in fruits, vegetables, whole grains, healthy fats and lean protein sources is crucial, and why nutritional supplements are often also recommended to fill in any gaps.

The results of the scientists’ analysis suggest that a diet high in antioxidants and micronutrients may decrease the risk of producing sperm with DNA damage, especially in older men. “The different response of the old and young men presents new opportunities for health care, especially for older men planning families,” Wyrobek explains.

His research points to the need for future studies to analyze whether increased antioxidant intake can lower the chance of genetically abnormal pregnancies, and whether it can increase fertility and overall sperm health. The link between micronutrient intake and sperm health has been made extremely clear by Wyrobek’s study. For older men, these findings could prove to be an invaluable guide to help them improve their overall sexual health.