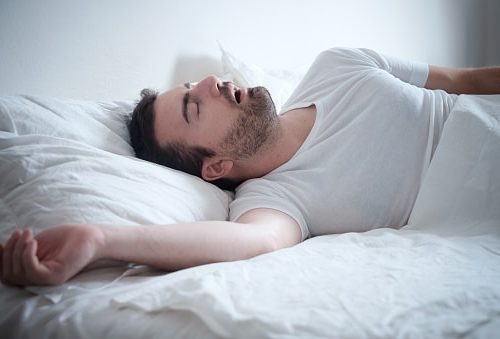 Obstructive sleep apnea occurs when there is a frequent obstruction in the upper airways, causing a person to temporarily stop breathing in their sleep. It’s the most common form of sleep breathing disorder, affecting nine percent of men and four percent of women. If the issue is left untreated, it can cause cardiovascular, cerebral, and metabolic conditions to develop due to the lack of oxygen caused when the patient stops breathing.

In recent years, there has been a vast increase in the prevalence of obstructive sleep apnea, as the incidence of obesity continues to rise. The two conditions, unfortunately, create an environment the other requires to develop, thus resulting in a medical catch-22.

Obesity can cause respiratory problems to develop due to lack of physical activity, resulting in the development of sleep apnea. Sleep apnea can result in lowered functional capacity for physical activity, resulting in obesity. For this reason, it is even more important to detect the presence of obstructive sleep apnea as early as possible. In a new study, researchers attempted to do just that by measuring if the six-minute walk test could be used as a predictor for obstructive sleep apnea.

The six-minute walk test is often used to assess a patient’s physical capabilities and risks for cardiovascular disease. The distance walked within the six-minute time frame provides an indicator for a patient’s oxygen consumption. If a patient were to perform badly on the walk test, it could indicate their vulnerability to developing sleep apnea or its presence, or so predicted the researchers of this new study.

The study enlisted 47 patients with obstructive sleep apnea as participants and the study lasted one year. There were 33 men and 14 women in the group. Each of the participants had a polysomnography to confirm the diagnosis of obstructive sleep apnea and completed the six-minute walk test the following day. The results of the testing showed a relationship between the ability to complete the walk test and severity of sleep apnea. This study did not find any differences between the sexes, however, unlike the few other studies in this area currently.

The connection between the severity of sleep apnea and the completion of the six-minute walk test demonstrates the importance of early detection of the sleep disorder. When left untreated over long periods, the condition can severely limit a patient’s functional capability. These results were also related to higher BMI in participants, i.e., participants who walked shorter distances during the six-minute walk test also weighed more on average than those who walked farther distances. This reinforces the association between obesity and sleep apnea and vice versa.

Related: Worried about obstructive sleep apnea? Your smartphone may analyze your sleep-wake cycle