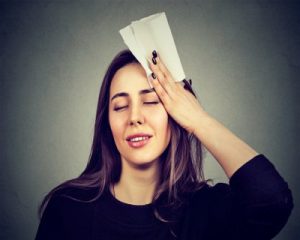 Hot flashes, commonly associated with menopause in women, may also be a sign of a sleep disorder called obstructive sleep apnea and could increase the risk of cardiovascular disease as well as diabetes. Research carried out by the North American Menopause Society (NAMS) published in Menopause explains this relationship.

What is obstructive sleep apnea and how is it linked to menopause?

Commonly associated with snoring, obstructive sleep apnea refers to a condition where a person finds it difficult to breathe during sleep. This may cause someone to wake up at night often and experience symptoms associated with lack of rest such as headaches, difficulty concentrating, and daytime sleepiness. While it is more prevalent in men, as many as 53 percent of perimenopausal and postmenopausal women suffer from this condition.

Obstructive sleep apnea often goes undiagnosed in middle-aged women, as they experience symptoms of menopause that may be attributed to their reduced quality of sleep. Hot flashes or night sweats are experienced by up to 80 percent of menopausal women which may keep them up at night.

In addition, the symptoms experienced by women are not as obvious as those experienced by men. Headaches, fatigue, anxiety, depression, and insomnia are the most common symptoms in women, and these are often linked to stress rather than obstructive sleep apnea. This stress can increase the risk of hypertension, stroke, heart disease, and even mortality.

Research published in Menopause suggests that menopause and its common symptom—hot flashes—can also put women at risk of diabetes. This study came out of the North American Menopause Society, and it allowed them to collect data from over 150,000 postmenopausal women.

The analysis of this data revealed that women experiencing hot flashes were 18 percent more likely to develop diabetes. Researchers also observed that this risk was higher for women who had more intense hot flashes or those who were experiencing them for a longer duration. In addition, women over the age of 55 were at a higher risk compared to younger women.

Researchers at NAMS also found a link between hot flashes and cardiovascular disease. They studied 272 non-smoking women in the perimenopausal and postmenopausal ages (between the ages of 40 and 60). Choosing a sample of non-smoking women would overrule the effect of smoking on the condition of the heart.

The study involved a physiological assessment of hot flashes on the functioning of endothelial cells—cells of the internal lining of blood vessels. It was observed that the ability of endothelial cells to dilate was affected more by hot flashes in younger fertile women than in elderly women whose cells were more or less unaffected. In other words, vascular dysfunction was observed in younger women, but not in elderly women. This indicated that the risk of heart disease developing in women experiencing hot flashes is greater if the woman is younger.

Hot flashes are not just a symptom of menopause but are indicative of health risks. Women with hot flashes may also suffer from sleep apnea that may go undiagnosed. In addition, hot flashes are associated with an increased risk of diabetes and bear a correlation with vascular dysfunction that can develop into heart disease.

According to Dr. JoAnn Pinkerton, hot flashes are more than just a “nuisance” and can affect cardiovascular, bone, and brain health. To minimize the occurrence and impact of hot flashes, she recommends that women—particularly in the menopausal stage of life—should practice healthier habits like eating a healthy diet, getting sufficient sleep, exercising, and giving up cigarettes and alcohol.