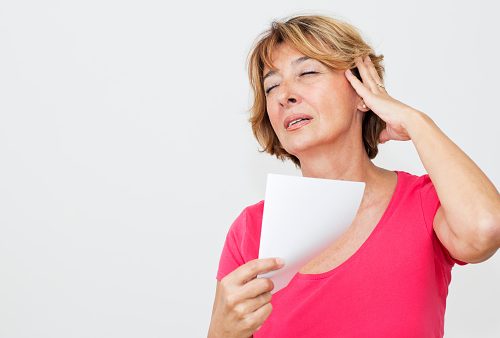 If you’re a woman in her 50s and are going through menopause, you may have experienced the dreaded hot flash, one of menopauses most common symptoms. A hot flash is a sudden feeling of intense heat, usually felt in the face, neck, and chest. These areas could turn red and you might sweat profusely, resulting in a chill.

Hot flashes can be caused by a number of hormonal changes but it’s most commonly associated with menopause. The severity of hot flashes range from person to person and may come on suddenly without warning. Some people have difficulty with their daily activities and their sleep could even be disturbed.

Over the years, the use of soy for hot flashes has been inconclusive. A recent review of the research that was published in Menopause: The Journal of The North American Menopause Society shows that taking soy supplements could help decrease hot flashes over time. Whether women like it or not, hot flashes are a fact of life, but there are things you can do to ease the discomfort.

Decreases in estrogen and progesterone eventually result in the woman no longer having her period each month. After a year of no periods, menopause is considered over and a woman can no longer get pregnant.

A hot flash typically appears similarly in most women but it can vary. Symptoms may consist of feelings of intense heat that can make your face and neck appear red and blotchy, with some women reporting the feeling of blood rushing from the lower half of their body up to their head. During episodes, sweating may occur due to the body attempting to cool down, sometimes causing chills as a sudden cool sensation washes over. Hot flashes may also cause a rapid or irregular heartbeat and pulse as well as possible feelings of dizziness.


How long do hot flashes last

A hot flash episode may last as little as 30 seconds or as long as 30 minutes, and it is, unfortunately, one of the most common symptoms. Menopause-related hot flashes could stick around for a couple of years when a woman reaches the end of her reproductive age. On average, they last about seven years and may go on for a many as 11 years or more in rarer cases.

When a woman reaches menopause, hormones in her body begin to change and fluctuate, with decreased estrogen levels being the primary reason for causing hot flashes. While not entirely exclusive to menopausal women, hot flashes also occur in women of childbearing age, and even men. The possible reasoning for this is thermoregulation (methods the body uses to control and regulate body temperature). While these theories do make sense, experts are not completely sure why hot flashes are prominent during menopause, with decreased levels of estrogen being the most likely answer.

While experiencing a hot flash is generally a fact of life for menopausal women, there are certain things that may exacerbate their onset. Smoking, for example, has been known to bring on more hot flashes, being overweight or obese is associated with them, and physical inactivity increases the likelihood of having them as well.

It has also been noted that certain ethnicities tend to have a genetic predisposition to having more or less hot flashes during menopause, with African American women reporting more cases compared to women of European decent. Hot flashes are less common in women of Japanese and Chinese descent than in white European women. Generally, there are little to no complications, with it being more of an annoyance, Over time, however, it may be the cause of chronic insomnia, sleep disturbances, and eventual memory problems.

There are many treatments that are available for women suffering from severe symptoms of menopause. Due to the estrogen and progesterone changes, a common medical treatment is hormone replacement therapy (HRT). HRT is sometimes called estrogen replacement therapy. HRT comes with an increased risk of breast cancer, heart disease, and stroke. It is therefore recommended that women take the lowest dose possible for the shortness amount of time. Other treatment options include antidepressants, blood pressure medications, and anti-seizure medications. Diet and lifestyle changes are also recommended to help deal with the symptoms of menopause.

Soy comes from soybeans. It can be found in a soy powder, milk, or in supplement form. The active ingredients in soy are isoflavones. The isoflavones are changed to phytoestrogens in the body and act like estrogen. Many women have heard of anti-aging tips that include using soy for the prevention of breast cancer, menopausal symptoms, and premenstrual symptoms (PMS). Following anti-aging tips, including supplementing your diet with soy, may help to reduce the symptoms of estrogen and progesterone issues.

How to get rid of menopausal hot flashes

Being a common symptom experienced by millions of women worldwide, there are a number of home remedies that have been passed down from generation to generation, with some women swearing by them. There are many different kinds of menopausal hot flash treatments available, with most being general vitamins and minerals or certain herbs that claim to get rid of hot flashes or at least reduce their occurrence. Some of these ancient remedies are not scientifically backed, however, there are some things a menopausal woman can do to reduce the frequency of hot flashes.

What is the connection between soy and menopause?

Researchers looked at 19 studies that were previously conducted and pooled the data. Only studies that used soy supplements were included because the dosage of soy could be controlled. The analysis of the combined data showed that individuals who took an average of 54 milligrams of supplemental soy isoflavones a day for six weeks to 12 months had a 21 percent decrease in the frequency and a 26 percent decrease in the severity of their hot flashes. The authors concluded that the use of soy supplements does, in fact, have a significant effect on the reduction of hot flashes.

Many women are concerned about using HRT. For these women, supplementing with soy for six-to-twelve weeks may be a better treatment option. Furthermore, even for individuals who are not weary of using HRT, soy supplementation may be the best conservative treatment for hot flashes experienced during menopause.

Further research should look at other ways in which soy may help with the aging process so that additional anti-aging tips can be developed to help people cope with the natural changes that occur as we age.

(Disclaimer: Always consult with a healthcare practitioner prior to supplementation of soy isoflavones. They may increase the risk of breast cancer and other conditions. Soy isoflavones may also interfere with medication such as blood thinners.)

Related: How to get rid of a UTI naturally?