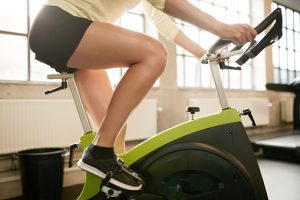 What if I asked you to commit to one hour of exercise per day? Too much? How about 30 minutes? Still too much? Well, what if I told you that you only need to commit to a one-time burst of exercise for about 10 minutes to reap some positive effects? That seems to be the case, according to a new study.

Researchers at Western University in London, Canada suggest that a 10-minute aerobic workout measurably boosts brain power. By only committing to this short amount of time, participants can expect to see an improvement in problem-solving skills and focus.

“Some people can’t commit to a long-term exercise regime because of time or physical capacity. This shows that people can cycle or walk briskly for a short duration, even once, and find immediate benefits,” said Kinesiology Prof. Matthew Heath, who took part in conducting the study.

Measuring the effects of exercise vs. idleness on brain power

The study in question involved subjects to either sit and read a magazine or perform moderate-to-vigorous exercise on a stationary bicycle for 10 minutes. Eye tracking equipment was used to examine each participant in their respective groups, measuring reaction times with a cognitively demanding eye movement task.


This eye test was designed to challenge areas of the brain that are responsible for executive functioning, which included decision making and inhibition.

Those who performed the 10-minute exercise were documented as having an immediate improvement, with their responses being more accurate and their reaction time up to 50 milliseconds shorter compared to measurements before they started exercising.

While this may seem like an insignificant gain, the researchers proclaim that a 14 percent improvement was seen in some cases. This makes it a valuable enhancement for those who are afflicted by conditions such as early dementia, who are inherently less mobile due to old age.

This study provides evidence that brain power can be boosted by exercising for a short period of time, another accolade in favor of staying physically active. This effect can be translated to other areas of life, as the professor recommended his students get some exercise first before they write a test or go into an interview as the connections of the brain appreciate it and will perform better.