Home » Brain Function » Sleep » If you’re having trouble sleeping, you’re at risk for this 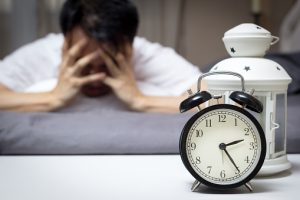 Tossing and turning every night isn’t just annoying and exhausting. New findings suggest that it can actually be detrimental for your brain. A common sleep disorder – known as rapid eye movement sleep behavior disorder (RBD) – puts those affected at a greater risk for neurodegenerative diseases including Parkinson’s disease, multiple system atrophy, and dementia with Lewy bodies.

In autopsies of RBD patients researchers found clumps of proteins – asalpha-synuclein aggregates – in certain areas of the brain responsible for regulating REM sleep.

It is well known that many patients with neurodegenerative disorders suffer from sleep problems, even if it is not specifically RBD. Researchers have believed that sleep disorders in these patients were often a consequence of the neurodegenerative conditions, but now they are suggesting that the relationship is far more complex.

Researchers conducted a review of studies that examined sleep disorders and neurodegenerative disorders. The review helped researchers uncover a link between the two, which can help explain how sleep disorders affect disease later on in life.

Our bodies go by circadian (Latin for “about a day”) cycle, which is about 24.2 hours. This internal clock – run by two genes, CLOCK and BMAL1 – regulates about 10 percent of the 20,000 human genes, coordinating sleep-wake schedule, body temperature, hormone changes, and other processes.

The researchers identified genes PER1, PER2, PER3, CRY1 and CRY2, which produce proteins that block activity of CLOCK and BMAL1.

For the study, the researchers collected circadian data from 1,282 healthy elderly women by having them wear activity trackers. The participants’ cognitive function was assessed five years after the start of the study. The researchers found that the more the circadian cycle was disrupted the higher the risk of developing mild cognitive impairment or dementia.

The results do not establish causality, so additional research is required to further explore whether sleep disorders affect cognition or it is the declining cognition that affects one’s sleep.
Researcher Erik Musiek explained, “Sleep and circadian disruptions may be considered a modifiable risk factor, like cholesterol in heart disease. If we could lower that risk and stave off disease by a few years, millions fewer people every year would be affected. Rather than giving people sleeping pills, something that synchronizes their clocks at the molecular level—that’s what we think would be a good idea. Or, could we turn on protective aspects of the clock machinery so they were protecting our brain all the time, not just at certain times of day? Targeting these pathways would be the next generation of therapy, beyond just getting a good night’s sleep.”

Although there is currently no treatment to prevent dementia in sleep disorders, the findings of the review imply a multipronged approach to prevention and treatment. Musiek concluded, “We haven’t gotten to the point where one works at all. But once one works we can start looking at combination therapies.”

The takeaway for now is to improve your sleep as much as possible in order to protect your brain from illness.

The benefit of sleep you didn’t know