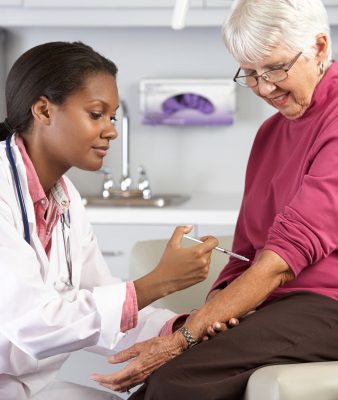 Around this time every year, a highly infectious virus known as influenza begins spreading throughout the nation. It passes from person to person through the air we breathe, multiplying in cells that line our body’s airways. This seasonal epidemic of respiratory infection leaves thousands of people severely sick, and has even been known to take lives.

Eighty years ago, a vaccine was developed to combat the influenza virus, that now saves countless people from having to battle with these dangerous flu symptoms. However, skeptics remain about getting the flu shot as certain events have produced fear and a steady stream of urban legends and medical myths. The scientific community has been working hard to debunk these myths, and here are its verdicts on some of the most common ones.

Myth #1: You can catch the flu from the vaccine

The flu vaccine is made from a dead form of the virus – but such types of vaccines can’t give you an actual infection. When people think they have come down with flu after getting the shot, doctors say they’re either sick with a cold or were already incubating the flu.

Myth #2: There is no difference between a cold and flu

Many people think of the influenza flu as just another sort of cold. However, while cold and flu symptoms may appear very similar, and one is often mistaken for the other, the flu is definitely more dangerous than a common cold. While most people are able to naturally combat a cold without any serious complications, 200,000 people are hospitalized due to the influenza flu virus in the United States alone, and nearly 36,000 of those cases result in death.

RELATED READING: The Flu Vaccine Could Save You From Heart Attack

Myth #3: You don’t need to get a flu shot every year

As it spreads, the influenza virus slowly mutates and changes, either due to natural errors made during viral reproduction, or due to viral adaptation. These changes or mutations make it very difficult for our immune systems to recognize the infection, despite having been already exposed, infected or vaccinated before. As such, flu shots are modified each year to give your immune system the edge over the latest strains of the virus.

Without actually falling sick, you may be carrying the influenza virus. This means you can easily spread it to other people, contributing to the infectiousness of the virus.

Myth #5: Antibiotics can fight the flu

Antibiotics are produced to impede the spread of bacterial infections. Influenza, however, is a viral infection.

Myth #6: You can only get the flu once every flu season

Two types of the flu, type A and type B flu, spread every season. If you get type A, you can still be infected by type B, so it is advisable to get vaccinated the moment you get the flu. Failure to do so might leave you susceptible to another attack of the flu in the same season.

Myth #7: The flu vaccine is ineffective on children

Numerous reviews have concluded that certain flu vaccines are effective in children. For example, nasal spray-based flu vaccines have been shown to have a 66 to 77 percent success rate at protecting younger children from the flu.

RELATED READING: Are You Too Late For The Flu Shot?

Myth #8: Go out in the cold and flu will get you

There is no real correlation between cold and flu. Flu is caused by a particular type of virus, which can infect your body regardless of the temperature outside. The reason you are more likely to contract the flu outdoors is because you interact with more people.

Myth #9: Pregnant women cannot be vaccinated against the flu

There are no health hazards preventing pregnant women from being vaccinated against the flu. Canada’s National Advisory Committee on Immunization produces a priority list for flu vaccination, and pregnant women are actually considered to be a higher vaccination priority than many other groups of healthy people.