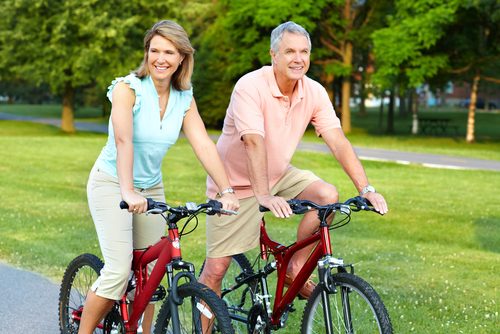 Ever wanted to ditch those bad health habits – smoking, eating poorly, not exercising, etc. – but just find it too hard? Change isn’t easy.

Going it alone can be difficult, so the support you have to make those changes can be a large factor in your success.

More so, as new research suggests, support from a spouse or partner could increase your likelihood of adopting good health habits. If you want to change your life for the healthier, it may be as simple as doing it together, as a team.

After all, isn’t change easier and more satisfying when someone else is involved?

Get healthier with your partner

Research from the University London College (UCL) in the U.K., published in JAMA Internal Medicine, found that healthy behaviors were more likely to occur with a partner. The study looked at 3,722 cohabiting couples, 50 years and older, to determine their likelihood of quitting smoking, losing weight and becoming more active.

The secret? Their partner also embarked on the same lifestyle change at the same time they did.

When it comes to swapping bad habits for good, the team approach gets the best results, making you healthier and reducing your risk of disease, including cancer, researchers say.

What happens if your partner doesn’t want to join in, or you live alone? Getting a friend on board as your teammate can also be effective. Make a plan together and cheer each other on. You have someone to hold accountable if you slip up, and you’ll have each other’s back.

Social support doesn’t just affect our ability to make healthier choices and follow through on them, it also benefits our overall health. There’s a huge body of research on the subject, and a fascinating analysis published in The Social Determinants of Health: The Canadian Facts. The book outlines the implications of social exclusion and its impact on health.

For those who feel alone and socially disconnected, there is an upward trend in the rise of diabetes, respiratory and cardiovascular disease, as well as various chronic illnesses. And yet, wealthy countries like Canada and the U.S. focus more on the illnesses themselves than the underlying factors that contribute to poor health in the first place.

Prescription medications and surgeries can only do so much.

RELATED READING: What your eyes reveal about your health

Social support as important as your daily walk

I think that being connected is more important than we realize. Having the support of a partner, family or close friends plays an important role in how we thrive and cope with the challenges that come our way.

A lack of social support, on the other hand, can increase stress, anxiety and depression. These take a toll on our physical and mental health, and can make our bad habits even worse, the research shows, such as an increase in smoking and drinking, and continued lack of physical activity.

It comes down to this: Social support is equally as important as your daily walk or eating healthy, so keep it in mind. If you have a goal to improve your health, get your spouse to join you, or even a friend, and do it together. Accomplishing a goal with someone else makes it that much more enjoyable – and gets results!