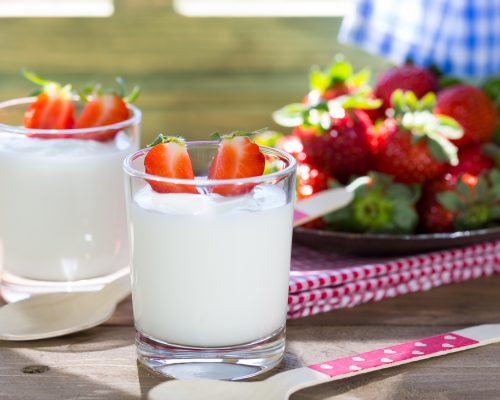 Dairy is good for your whole body – heart, bones, teeth – and a study has singled out yogurt from the dairy foods for its ability to lower your risk of type 2 diabetes.

The yogurt study was conducted by Harvard School of Public Health and funded by the National Institutes of Health (NIH). Findings revealed a strong link between yogurt consumption and a lowered risk of type 2 diabetes. This suggests that increased consumption of yogurt could decrease the risk of diabetes from ever developing in the first place.

Within three samples, more than 15,000 cases of type 2 diabetes were spotted during a follow-up period. After adjusting their findings for dietary factors and chronic disease factors, researchers found that just eating a 28 g serving (about two tablespoons) of yogurt each day was associated with an 18 percent lower risk of type 2 diabetes.

What’s more, yogurt provides calcium, vitamin D, and protein, not to mention plenty of probiotics, which are microorganisms that play a key role in regulating digestion and intestinal function.

Are you at risk for type 2 diabetes?

Diabetes is a chronic metabolic disease that causes high blood sugar levels in the body. Roughly 90 percent of diabetes is type 2. That’s when the body either does not produce enough insulin or suffers from insulin resistance.

In other words, the insulin that is produced is simply unable to process glucose efficiently. People with type 2 diabetes in particular are at a higher risk of developing cardiovascular diseases – illnesses like stroke and coronary heart disease.

Today, an estimated 25.8 million people in the United States have diabetes, according to the American Diabetes Association. That’s more than one in three American adults. More than 10 million are 65 years of age or older, while about 215,000 are under 20. Hispanics and African Americans are most likely to have the disease, compared to other ethnicities.

Around the world, though, a striking 366 million people are affected by this condition. And that number is expected to rise to 552 million by 2030.

Type 2 diabetes is characterized by high blood glucose (hyperglycemia) resulting from the body’s inability to produce or use enough insulin. Increased blood sugar levels can then lead to serious short-term and long-term health issues, including nerve and kidney damage, heart disease, and even blindness.

Of course, researchers at Harvard School of Public Health acknowledge that their study has its limits. That’s because their findings may not be representative of the entire population.

When choosing a yogurt, you need to be mindful of hidden calories and carbohydrates that can be snuck into your yogurt through candies, nuts, and fruit. These hidden carbohydrates and calories can increase blood sugar, so it’s best to opt for a plain variety and add in your own toppings that you can moderate.

You can use yogurt as a cooking and baking substitute for sour cream, for example, or serve it for a creamy dessert with a fresh fruit puree. Greek yogurt can be a little more expensive, but offers about double the protein of regular yogurt.
It’s a tasty way to lower your risk of type 2 diabetes and get all the nutrient benefits of dairy.

A new study has found that melatonin signaling is a risk factor for type 2 diabetes due to insulin-inhibiting effects of this hormone. When a person is asleep, the pancreas releases less insulin, but this rate could differ on a nightly basis. Continue reading…