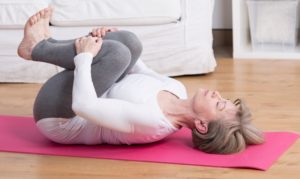 Intensive yoga practice in rheumatoid arthritis (RA) patients may help lower disease symptoms and depression. Researchers found that improvements were seen in certain patients’ inflammatory biomarkers along with an assessment of functional status and disease activity. The researchers suggest that yoga has promotive, preventative, curative, and rehabilitative potential in improving health.

Lead investigator of the study Dr. Rima Dada explained, “Our findings show measurable improvements for the patients in the test group, suggesting an immune-regulatory role of yoga practice in the treatment of RA. An intensive yoga regimen concurrent with routine drug therapy induced molecular remission and re-established immunological tolerance. In addition, it reduced the severity of depression by promoting neuroplasticity.”

Dada noted that with an increase in disease and underlying depression, there is a higher risk of disability, reduced quality of life, and a reduced response to treatment.

The study looked at 72 RA patients. Some underwent 120 minutes of yoga, five days a week, and the remainder were the control group. Both groups still received RA treatment of routine drug therapies. There were significant improvements observed in the yoga group compared to the control group.

Dada continued, “Our results provide evidence that yoga positively modifies the pathobiology of autoimmunity at cellular and molecular levels by targeting mind-body communications. Further research is needed for the exploration of possible mechanisms underlying the cumulative effect of yoga on multiple pathways at a cellular level. Yoga facilitates the mind’s capacity to affect bodily function and symptoms mediated through a variety of downstream pathways and bring about natural immunological tolerance.”

This is one of the only studies that specifically looks at inflammatory biomarkers, cellular aging, and oxidative stress changes through yoga. There is already mounting research suggesting that yoga is an effective intervention for rheumatoid arthritis management.

Dada concluded, “This study offers a new option. Pharmacological treatments can be supplemented with alternative and complementary interventions like yoga to alleviate the symptoms at both physical and psychosomatic levels.”

Yoga can be widely applicable to many RA patients to not only better manage RA but to target underlying depression as well.