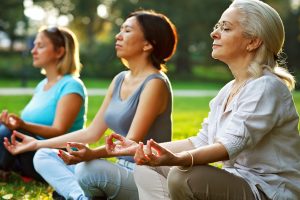 We all try to get more exercise, but it’s difficult for some of us especially as we get older. As we age, we become less mentally and physically sharp and this affects our ability to exercise.

However, a new study has found that older women who practice yoga present signs of greater “thickness” in areas of the brain involved in memory and attention. This is great news, as cognitive impairments related to aging are associated with these same areas.

Yoga is a physical, mental, and spiritual practice that originates from ancient India. It also highlights healthy diet, processes to internally purify the body, and proper breathing techniques. Many variations of yoga exist, all of which promote physical and spiritual liberation through physical exercise.

Because yoga doesn’t require participants to be in prime athletic shape, it serves as an approachable exercise method for many seniors.

The researchers found that compared to other healthy, active women of the same age, those who participated in yoga had a greater cortical thickness in the brain’s left prefrontal cortex.

The researchers stress that since their study was relatively small, they can’t be absolutely sure about the conclusions that were drawn from the study.

A definite association can’t be made

The study in question was based on brain scans taken from less than 50 women. The results did not prove that yoga was the sole reason for the differences seen in brain structure. Because the study was small, the possibility exists that these differences were there already.

However, yoga did at least prove to be associated with improved brain function, adding more evidence to its health promoting effects.

“This contributes to the evidence that yoga practice has neuroplastic effects on the brain that may translate into other health benefits—like better mood and cognition,” said Dr. Helen Lavretsky, a professor-in-residence of psychiatry at the UCLA Geffen School of Medicine, who was not directly involved in the study.

Previous research into yoga and its effects on mental function found that participants were able to do better on standard memory tests after about 12 weeks of yoga sessions. This is thought to be thanks to yoga’s ability to relieve stress, helping to restore “brain fitness.”

Future studies need to uncover whether yoga truly has beneficial effects on the brain. A larger sample size is necessary to prove yoga’s efficiency.

Why you should take up yoga, tai chi, and meditation