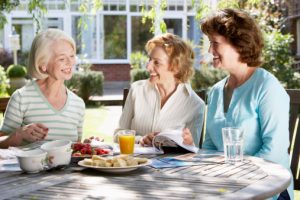 A new study by researchers from the Monell Center and collaborating institutions suggest that a woman’s social life may be linked to how well her sense of smell functions. The study found that older women who do not do well on a smell identification task tend to have fewer social connections, as reported in the online open access journal Scientific Reports.

This conclusion was derived from analyzing data from National Social Life, Health and Aging Project (NSLHP), a population-based study of health and social factors in the United States. It was collected in 2005 and 2006 from a nationally representative sample of 3,005 American adults between the ages of 57 and 85. The data included odor identification test scores and information on the participant’s social lives.

Odor identification scores, which established a measure of olfactory function (sense of smell), were compared with an aggregated “overall social life” score that included factors such as the number of friends and close relatives a person had and how often they socialized. These factors were adjusted to control for any possible confounding variables such as education level, tobacco use, and physical and mental health issues.

The findings demonstrated a clear link between an older women’s sense of smell and her overall social life score, with women who had a strong sense of smell having a more sociable life. The opposite was found in women with a poor sense of smell.

“Our findings confirm that the sense of smell is a key aspect of overall health in the aging population,” said Johan Lundström, a cognitive neuroscientist and senior author of the study. “More than 20 percent of the U.S. population over the age of 50 has a reduced sense of smell. We need to better understand how olfaction is linked to social behavior in order to improve quality of life as we age.”
Interestingly enough, while a link was found between olfactory function and level of sociability in women, no such connection was appreciated in men.

“This intriguing sex difference could suggest that smell training, which has been shown to improve a reduced sense of smell in both men and women, may have an additional beneficial function in older women by helping to restore both the sense of smell and, by extension, social well-being,” said Lundström.

While this connection may seem odd to some, it provides some insight into whether olfactory loss directly influences social life and the possible mechanisms involved.