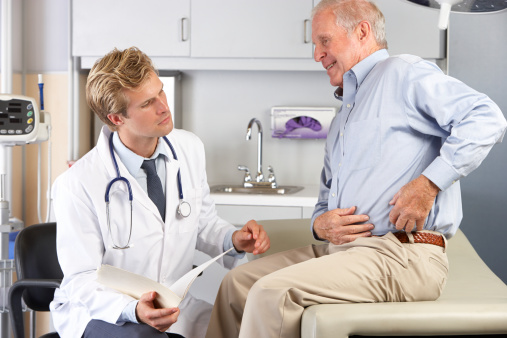 When you think of hip joint pain, you most likely think that it only affects the elderly.

However, it is increasingly more common for younger individuals to visit their doctors with complaints of hip discomfort. Often this discomfort is a sign of a more sinister underlying condition that needs medical attention. Do not ignore nagging hip pain!

The hip has a ball and socket type of joint.  In a normal hip joint, the head of the femur (the ball) fits perfectly into the socket.  However, when the head of the femur doesn’t fit properly into the socket, femoral acetabular impingement (FAI) can result. FAI can develop over time with activities that damage the labrum or cartilage around the hip, such as sports including soccer and basketball.

It is important that FAI be diagnosed and managed early to avoid complications and reduce the chance of having to undergo surgery.  It’s often misdiagnosed as something less serious. Symptoms of FAI include low back pain, groin pain and hip joint pain that is localized to the side of the hip and buttocks. If FAI is diagnosed early, physiotherapy can be started to improve hip and core strength. However, if FAI is diagnosed at a later stage, surgery may be necessary to reduce joint pain and improve hip joint function.

Joint specialists from the Ohio State University Wexner Medical Center report that FAI has become increasingly more common over the past 10 years, and is usually the result of sports injuries in younger individuals.

It is common for this type of injury to occur when an individual takes part in high-level sports year round in the years before and during puberty, because this is the time when the hip growth plate fuses.  High-level competitive soccer, basketball and martial arts, to name a few, can result in abnormal fusion of the growth plate which can lead to FAI.

Wexner joint specialists recommend that younger athletes take part in various sports instead of focusing on one at a high level in an effort to reduce stress on the hip joint musculature which will help to reduce the risk of developing FAI.

RELATED READING: 6 Exercises To Improve Posture And Alleviate Back Pain

Another concern with hip joint pain and instability is a condition known as runner’s knee.  A two-year study, published in Medicine & Science in Exercise & Sports, conducted gait analysis on 400 female runners.  The runners were then followed for two years to monitor the incidence of injury.

Of the 400 runners, 15 of them developed a condition known as patellofemoral pain, commonly referred to as runner’s knee.  The researchers found that the women that developed runner’s knee had greater hip adduction (hip movement towards the middle of the body) than women who didn’t develop this condition.

RELATED READING: Natural Pain Reliever Gets To The Root Of Arthritis

Since hip joint pain often occurs in active individuals, it is important to engage in strengthening exercises for this joint to prevent injuries. Below are simple exercises to strengthen the hip and surrounding muscles. Three sets of eight to 12 repetitions of each exercise should be performed for optimal benefit.  Once the exercises are mastered, a resistance band can be added to make each exercise more challenging.

1. Seated Hip External Rotation: To perform this exercise, sit on a table, chair or bed with your legs dangling. While keeping your knees together, lift your left leg out to the side, hold for three to five seconds and release. Perform on both sides.

2. Standing Hip Flexor: To perform this exercise you will be standing with legs slightly apart.  While keeping your left leg straight, lift it forward for three to five seconds and release slowly.  Perform on both sides.

3. Standing Hip Abductor: To perform this exercises you will be standing with your left leg slightly behind you. While keeping your left leg straight, lift it out to the side and hold for 3-5 seconds and release.  Perform on both sides.

4. Clamshell: To perform this exercise you will be lying on your side. Slightly bend your knees while keeping your legs and ankles together. Open and close your legs, similar to a clam type movement while keeping your feet together throughout the movement. Perform on both sides.