Home » Anti-Aging » Can You Get Rid of Cellulite with Your Diet? 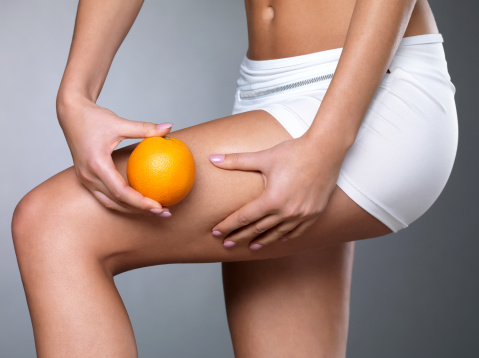 Do you hate the look of cellulite on your legs, stomach or behind? Over 80 percent of women in the western world have cellulite in some part of their body, and are desperate to find a way to get rid of it. Despite hundreds of products on the market that claim to help you rid yourself of those stubborn dimples, scientists argue that there really is no quick fix. In fact, new research suggests that the reduction of cellulite is largely connected to certain modifications in your diet.

Cellulite is a dimpling or ‘cottage cheese’ effect that skin displays due to the stretching of connective tissues around fat deposits. While many people believe that cellulite is associated with being overweight, research shows that even thin people can have it – even supermodels have admitted to having cellulite.  What’s more, several U.S studies indicate that cellulite is largely genetic.

The Role of Diet

Scientists continue to study the safest and most cost-effective ways to treat cellulite. Interestingly, in recent years, scientists have uncovered what they believe is a link between a nutritious diet and cellulite scores to help eliminate that bothersome jiggle.

A study published in the U.S National Library of Medicine found that rubbing a spermine-trapping molecule on the thigh could help lower thigh cellulite scores. Spermine is found in a wide range of organisms and tissues.  It was first found in human semen, but most recently, it was discovered in small amounts in food. Ground meat, green peas, and cheddar cheese are all sources of spermine.

Fried and fatty foods have also been associated with cellulite. An Italian study showed that a hormone known as adiponectin appears to act as protection against cellulite in the buttocks, and the levels of this hormone drop with regular consumption of fatty foods. .  Studies have demonstrated that switching to a vegetarian diet can increase adiponectin levels even further, by as much as 19 percent.

A Healthy Diet to Reduce Cellulite

Some medical professionals believe a diet rich in antioxidants and anti-inflammatory properties is antoher good way to prevent cellulite. Antioxidants prevent free radicals from weakening connective tissues that often lead to lumps and bumps in the skin. Foods that are high in antioxidants include blueberries, beans, and cranberries.

Doctor Howard Murad is one of the world’s leading experts on skin health. He recommends antioxidants to maximize skin health, including foods that contain vitamins A, C and E. He also suggests polyphenols and bioflavonoids. He calls them “skin-nourishing”. These nutrients can be found in leafy green vegetables, as well as fruits like oranges, pomegranates, and mangoes. A fresh salad would be a great way to get all these fruits and vegetables in one place and get those crucial vitamins you need to reduce the appearance of cellulite.
Murad and his supporters believe that dehydration can increase the appearance of cellulite. Staying hydrated and consuming foods rich in Omega-3, instead of fatty foods, can diminish the appearance of dimples. So drink plenty of water to go with your meal including fish, eggs, or omega-3 enriched yogurt.

While there is no magic cure for cellulite, recent research seems to suggest that a healthy diet and exercise can help firm up our skin, giving way to a smoother appearance. We may not be able to rid ourselves of all the dimples but a more attractive appearance is very possible.