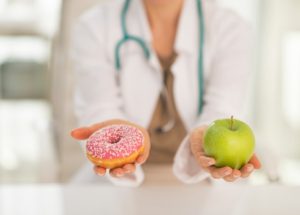 Having type 2 diabetes, also called adult-onset or non-insulin dependent diabetes, is very commonplace in today’s society. It affects nearly 9.4 percent of the entire U.S. population and this doesn’t show signs of slowing down anytime soon.

This growing trend is in direct correlation with the increasing rates of obesity in American citizens and has even extended to our younger population. The prevalence of type 2 diabetes has made health professionals around the globe concerned about the overall health of those affected, with mental well-being also in jeopardy.

According to a new report, type 2 diabetes can be reversed by simply losing weight. Even doctors were not aware of this, as it was believed that the disease was progressive and incurable.

There have been many studies exploring the possibility of curing type 2 diabetes, with evidence finding that shedding around 33 pounds (15kg) often produces total remission.

One study found that reducing less than one gram of fat in the pancreas through weight loss reverses diabetes.
Type 2 diabetes is a metabolic disease characterized by insulin resistance. It is a long-term disorder caused when the cells in the body inefficiently utilize glucose in the bloodstream. This is typically the result of poor lifestyle choices and genetic factors. Obesity is thought to be the leading cause of type 2 diabetes.

Type 2 diabetes tends to be solely managed with several types of pharmaceutical drugs that aim to reduce blood sugar and cardiovascular risks. However, some people with this disease may be able to reduce their sugar levels with diet and lifestyle changes alone, according to the researchers. But this is sadly not promoted by doctors enough and is seldom achieved by patients.

Several studies following type 2 diabetic patients only find a small fraction of them following guidelines, leading their condition to go into remission. The researchers believe that this is partly because patients aren’t putting the required effort into diet and lifestyle criteria to achieve it.

This results in patients developing further health problems as they live their lives and, on average, live six years less than those without the metabolic condition. This leads to increased costs of health care as diabetic patients become sick more often.

It was estimated in 2012 that the total direct and indirect cost of diagnosed diabetes in the U.S. was 245 billion dollars.

The researchers believe that if the case of diabetes remission were to be accurately coded by health care professionals, it could bring more awareness to the reversibility of the disease.

“Recognizing and accurately coding reversal of type 2 diabetes is key to improving outcomes and reducing healthcare costs,” said Prof. Mike E. J. Lean, a researcher from the University of Glasgow in the United Kingdom.