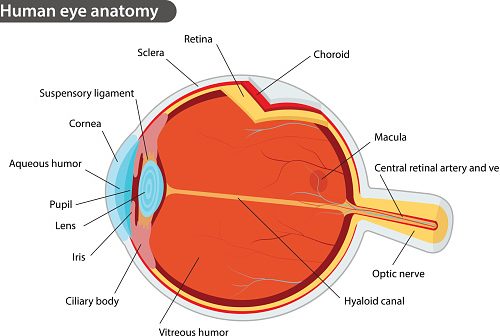 Experiencing a vitreous hemorrhage involves the leakage of blood into the fluid contained within the eye, known as vitreous humor, also known as the vitreous body. It is estimated that vitreous hemorrhage has an incidence of seven cases per 100,000, making it one of the most common causes of acute and subacute decreases in vision.

Vitreous humor is a clear gel-like substance that fills the space between the lens and the retina of the eyeball. Nearly 99 percent of this fluid consists of water, with the remaining one percent made of collagen and hyaluronic acid, giving it its gel-like consistency. The space in which vitreous humor resides represents 80 percent of the eye, having a volume of merely 4ml.

A vitreous hemorrhage may result directly from retinal tears or neovascularization (bleeding from newly formed blood vessel). This leads to blood leaking inside the eyeball, often resulting in the clouding of vitreous humor and vision impairment. This may vary from having a few “floaters,” blurred sight, or seeing only dark with a possibly reddish tinge.

Vitreous hemorrhages most commonly occur in those with severe diabetic eye disease, mainly occurring in older adults over the age of 60. In the healthy population, eye trauma at any age may lead to the condition.

What is the prevalence of vitreous hemorrhage?

The number of new cases of vitreous hemorrhage tends to coincide with the frequency of causative disease. Additionally, this measurement will also depend on the particular study population, mean age of the patients, and geographical region the study is conducted in.

By far the most frequent associated condition leading to vitreous hemorrhage is proliferative diabetic retinopathy (a disease commonly occurring in older adults), which is responsible for 31.5 percent to 54 percent of cases in the United States. This number is about six percent in London and 19.1 percent in Sweden. The most common cause of vitreous hemorrhage in young people is trauma.

A vitreous hemorrhage is typically caused by three main mechanisms. These include:

It is because these newly formed blood vessels lack endothelial tight junctions that they are predisposed to spontaneous bleeding, essentially being fragile blood vessels.

Often to sufficient mechanical force that overcomes the structural integrity of the blood vessel. Cases such as posterior vitreous detachment may compromise a blood vessel, leading to vitreous hemorrhage.

Other causes may be due to blunt or perforating trauma injuring intact blood vessels directly. This is a common occurrence in people younger than 40 years of age, directly leading to vitreous hemorrhage.

A rare cause of vitreous hemorrhage due to the rupture of normal vessels is Terson’s syndrome, caused by subarachnoid hemorrhage. This condition is caused by increased intracranial pressure leading to rupture of the retinal venules.

Blood from an adjacent source

Bleeding from retinal macro-aneurysms, tumors, and choroidal neovascularization can all extend through the internal limiting membrane and into the vitreous humor.

What are the symptoms vitreous hemorrhage?

Initial symptoms may present as:

Symptoms with significant vitreous hemorrhage may present as:

Also read: What is cloudy vision and how to get rid of it?

How to diagnose vitreous hemorrhage

After a doctor takes your medical history and a physical consisting of an eye inspection, the most useful test for the diagnosis of vitreous hemorrhage is a device called a slit lamp. This test allows doctors to look for the presence of blood in the vitreous humor. Depending on the amount of blood leakage into the vitreous, it may also be possible to identify the source of the bleeding with a slit lamp.

In cases where the amount of blood in the vitreous humor prevents adequate identification of the bleeding source, an ultrasound scan of the eye can be used. Ultrasounds can detect many causes of vitreous hemorrhage, including posterior vitreous detachment, retinal tears and detachments, tumors, and foreign bodies.

Other possible tests include a computed tomography (CT) scan in cases of penetrating injury and an angiogram to show the blood vessels in the back of the eye.

How to treat vitreous hemorrhage

Ultimately, the underlying cause of the vitreous hemorrhage will determine the most appropriate treatment required. Regardless of which kind of treatment is implemented, they all aim to find the source of the blood, put a stop to it, repair any damage to the retina before any resulting vision loss, and restore normal vision.

Additionally, vitreous hemorrhage patients are advised to avoid strenuous activity for several days after treatment as this may dislodge clots and trigger a new bleed. Sleeping with the head of the bed elevated will also allow for the blood in the vitreous humor to settle into the bottom of the eye, reducing the chances of it obstructing vision.

If there are excessive amounts of blood obscuring the ability to find the source of bleeding and preventing treatment, your doctor may suggest a vitrectomy, which involves the removal of the entire vitreous to get a better view of the back of the eye.

The following are specific treatments used for vitreous hemorrhage:

How to prevent vitreous hemorrhage

Prevention will involve reducing your risk or managing any underlying cause that increases your chances of developing a vitreous hemorrhage. This will include careful and regular management of diabetic eye disease and high blood pressure as well as quitting smoking. Protecting your eyes from any potential trauma is also recommended, especially during activities that have a risk of damaging the eyes, such as when using firearms or playing squash.

The severity of a particular cause will determine the outlook of how well a person will recover. For example, cases of vitreous hemorrhage due to posterior vitreous detachment will usually have a better prognosis compared to those with severe diabetic eye disease or macular degeneration. Additionally, the prognosis of a penetrating eye injury is often poor.

Having sudden blurred, hazy, or obstructed vision may be nothing but a transient phenomenon that quickly resolves on its own, possibly due to eye strain, overexposure to sunlight, or simply being tired. However, if you experience more pronounced and long-lasting vision changes that include blurriness, floaters, or even complete vision loss, you may have a more complicated underlying condition that should be evaluated by a medical professional right away.