Home » Skin Health » Vitiligo does not have adverse effects on pregnancy: Study 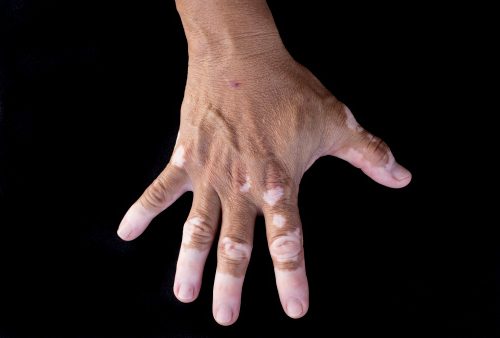 Vitiligo does not have adverse effects on pregnancy, according to research. Vitiligo is a skin condition that causes the loss of skin pigment, resulting in white patches. The skin stops producing melanin and depigmentation takes place. The onset of the condition is still not well understood, but there are several theories that offer some insight into possible causes.

For one, genetics may play a role in vitiligo, as it is seen to run in families. Another theory suggests that vitiligo may be caused by an immune system disorder, as patients report higher trigger incidences such as stress and prior sunburns.

Those who live with vitiligo may be concerned about having children, because kids of vitiligo patients are more likely to develop the condition, compared to kids born to parents without the skin condition. Continuing on the vitiligo treatment during pregnancy is another concern many women have. Some research suggests that medications taken for vitiligo may be passed on to the fetus. Expecting mothers should consult with their doctor with regards to their vitiligo medications.

Strong topical creams should be avoided, especially when breastfeeding. Again, consulting with your doctor before stopping any medications or creams is imperative.

For the most part, though, vitiligo itself does not result in pregnancy complications, and a woman can successfully go through pregnancy and give birth. What is unknown is whether the child will develop vitiligo.


Should you get pregnant if you have vitiligo?

If parents has vitiligo, there is a possibility they may pass on another inherited condition to their child, including albinism of the ocular type, autoimmune polyendocrinopathy syndrome, congenital deafness with vitiligo and achalasia, and even dyschromatosis symmetrica hereditaria.

If you have vitiligo, you may want to discuss your decision to become pregnant with your doctor. There are some factors to keep in mind, such as vitiligo severity and duration. As mentioned earlier, some medications will have to be stopped during pregnancy in order to reduce any risk for your child. Your doctor will know best whether you need to stop medications or try other ones to help you manage your vitiligo during pregnancy.

Because there is a genetic factor involved, passing vitiligo on to your child is a possibility and something to consider as well before conceiving.

For any other concerns about vitiligo and pregnancy, speak with your doctor. 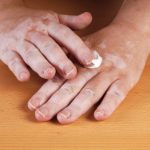 Common treatments for vitiligo include:

This past year, researchers also developed a unique way to treat vitiligo by transplanting pigment cells in order to repair the affected area. Dr. Amit Pandya developed this new technique, which is less painful than conventional treatment and involves harvesting cells from a blister and transferring them to the area that is missing pigment.

Dr. Pandya said, “This provides new hope for patients with vitiligo. The unique aspect of our procedure, which no one else in the world is doing, is the formation of blisters as the source of donor cells combined with laser surgery to prepare the grafted areas. The older method of cutting the skin leaves a scar. It doesn’t even hurt. It feels like something is sucking on your skin. Then using heat lamps we’re able to form blisters about the size of a dime.”

Aside from medical intervention, there are important at-home natural remedies to consider as well in order to protect your skin from damage. Home treatment for vitiligo involves:

Related: Psoriasis vs. vitiligo, differences in symptoms, causes, and treatments

In vitiligo, skin transplant surgery can be effective for restoring skin pigmentation: Study