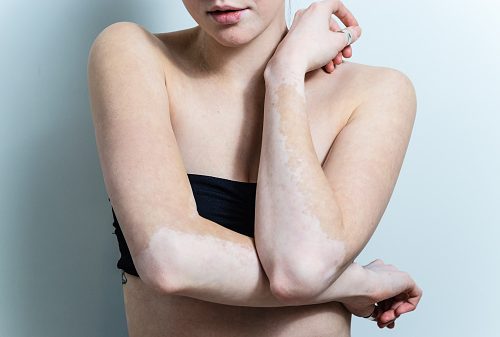 Psoriasis and vitiligo are two conditions that cause changes to the skin. Vitiligo is not contagious, nor is it life threatening, but it can definitely alter a person’s life. Depending on where the skin is discolored, vitiligo may affect a person’s self-esteem – for example, if it affects their face or other exposed areas. Individuals may not want to go out in public and there is even a risk of developing depression associated with self-image.

Psoriasis is a chronic skin condition caused by quick growth of skin cells and inflammation. Under normal conditions, skin cells grow, live, die, and fall off on a regular basis. When someone has psoriasis, skin cells grow rapidly and don’t fall off. As a result, the cells build up on the surface of the skin, and you end up with thick, scaly patches on your knees, elbows, lower back, or even your scalp.

Here we will outline the differences between psoriasis and vitiligo in terms of causes, symptoms, and treatments.

Approximately two percent of Americans experience psoriasis, which can begin at any age. For the most part, the first onset tends to take place somewhere between the age of 20 and 30, and second onset is usually at 50 to 60 years old. Currently, about 7.5 million people in the United States have some form of psoriasis. Some of them experience joint inflammation, which leads to psoriatic arthritis. Close to 90 percent of people with psoriasis get what is referred to as “plaque psoriasis”. These are patches of raised, reddish skin covered with silvery-white scales. There are other forms, including a type of psoriasis that can be found under the fingernails.

An estimated two to five million Americans live with vitiligo, with a prevalence rate of one in 136 Americans. Worldwide, prevalence of vitiligo is one to two percent. 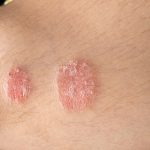 Psoriasis symptoms appear anywhere on the body, even the scalp, fingernails, and toenails. Symptoms of psoriasis include:

The primary symptom of vitiligo is discoloration of a pigmented area of the body – skin, hair, or eyes. Other signs of vitiligo include:

Vitiligo can appear just about anywhere on the body, but the geography of the affected areas depends on the type of vitiligo. Some types occur all over the body (generalized), some are just on one side of the body (segmental), and others only appear on select areas of the body (focal).

Difference between psoriasis and vitiligo causes

When it comes to psoriasis, the exact cause is unknown, but we do know that it tends to run in families and seems to be related to the functioning of the immune system. Sometimes, psoriasis can be triggered by a skin injury, including a cut or surgery. We also know that emotional stress, infections such as strep throat, and certain medications such as beta-blockers can trigger this skin condition.

In psoriasis, the white blood cells, known as “T cells,” attack a person’s own skin. This sets off a reaction that dilates blood vessels and seems to attract other white blood cells. What ends up happening is an increased production of skin cells that move too quickly to the surface, causing a red, scaly appearance.

Vitiligo takes place when melanin-forming cells begin to die. Melanin is what gives skin, hair, and even eyes their color, so when the cells stop producing pigment, you end up with light patches on the skin or no pigment at all.

Although the reason why these cells die is not completely understood, there are a few theories. 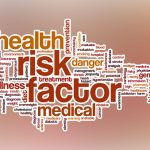 The reality is, anyone can get psoriasis, but certain factors can increase your risk of getting this skin disease. As mentioned above, family history is a potential risk factor. Also, viral or bacterial infections can increase the chance of getting psoriasis. People with HIV, for example, are more likely to develop this skin condition than people who have a healthy immune system. Children who tend to get strep throat a lot could also be at an increased risk of getting psoriasis. While we can’t say for certain why, research shows that excess weight is a risk factor. It seems that psoriasis tends to develop in skin creases and folds. Studies have also indicated that smoking increases the likelihood as well as severity of psoriasis.

If you have psoriasis, you should be aware of the associated complications. One of them is psoriatic arthritis, which can cause joint damage and pain. Psoriasis can lead to eye disorders. There is also evidence that people with psoriasis have a greater chance of getting type 2 diabetes. High blood pressure, Parkinson’s disease, and kidney disease have also been found in those who suffer from psoriasis.

The reason why some people develop vitiligo while others do not is still unclear. As mentioned, some possible risk factors may be an autoimmune disease, family history, and a sunburn or chemical reaction.

Complications stemming from vitiligo include social or psychological distress, sunburns or skin cancer, eye problems, hearing loss, and side effects associated with treatment, such as dry skin and itchiness.

A physical exam and medical history will help a doctor determine whether you have psoriasis. An examination of your skin, scalp, and nails can tell a lot. In some cases, a doctor will take a skin biopsy to help determine the exact type of psoriasis.

While there is no cure for psoriasis, treatments can lessen the severity of the symptoms and reduce the number of outbreaks a person experiences. The treatment really depends on the severity of skin condition. A doctor might suggest topical ointments, oral medications, injected medications, or perhaps, light therapy. Light therapy can slow down or even stop the growth of skin cells in the affected area.

Vitiligo is diagnosed with a medical exam and a look at the patient’s medical history, as well as a skin biopsy, blood testing, and a visit to an ophthalmologist and audiologist to check your vision and hearing, as vitiligo patients are at a higher risk for vision and hearing problems.

Common treatments for vitiligo include:

This past year, researchers also developed a unique way to treat vitiligo by transplanting pigment cells in order to repair the affected area. Dr. Amit Pandya developed this new technique, which is less painful than conventional treatment and involves harvesting cells from a blister and transferring them to the area that is missing pigment.

Dr. Pandya said, “This provides new hope for patients with vitiligo. The unique aspect of our procedure, which no one else in the world is doing, is the formation of blisters as the source of donor cells combined with laser surgery to prepare the grafted areas. The older method of cutting the skin leaves a scar. It doesn’t even hurt. It feels like something is sucking on your skin. Then using heat lamps we’re able to form blisters about the size of a dime.”