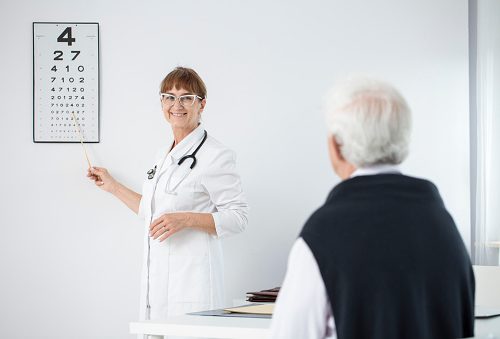 A new study from the University of Miami Miller School of Medicine has found that impaired vision may be an indicator for cognitive decline in elderly people. It has been shown that both vision loss and cognitive decline are increasing issues among the elderly and a cross-sectional association between the two has been established. Studies in the past have not closely examined the interaction between visual and cognitive impairment with age.

The researchers behind the current study believe that vision is the stronger factor in the association and have also said that their study is the first to show this relationship. The true causation behind the correlational decline in vision and cognitive function in the elderly is yet unknown, however.

This study took the form of a prospective longitudinal population-based analysis. The participants for the study consisted of 2,520 community-residing adults in Maryland. They were ages 65 to 84 at the outset of the population sample. On average the participants were 73 years old and 58% were women. The study had a follow up period of 8 years, during which the researchers measured visual acuity and cognitive function.

Vision a stronger influence on cognition than vice versa

Through comparisons of the visual acuity score at the beginning of the study with the cognitive function score, as well as scientific calculation, the researchers determined that visual acuity was the more dominant factor in the relationship. Meaning, the decline of visual acuity had a much stronger effect on the associated decline in cognitive function than vice versa. One hypothesis for the causation behind this is that visual impairment limits one’s ability to perform quality-of-life activities that benefit physical, mental, and emotional well-being, naturally causing additional stress to one’s cognition.

The researchers concluded by saying that if visual impairment were the driving factor in the association between the two, protecting vision and preventing vision loss in the elderly could be the most effective method of decreasing rates of vision loss and cognitive decline in this population globally.

They caution medical practitioners, however, that early intervention into vision loss should only be followed through if there is evidence that it will truly prevent further visual impairment or cognitive function. Until there is a fully viable treatment path, it should not be attempted for the sake of the patient. The researchers also note that if a solution for the optimization of vision were achieved, it may in itself stave off cognitive decline as a naturally occurring part of aging.