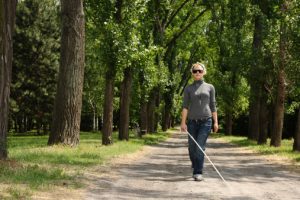 Vision problems raise the risk of unemployment, poverty, and mental health problems, according to a recent study. Researcher Mary Frances Cotch said, “Our focus has mostly been on severe visual loss and treating the eye diseases that cause it. This study is saying we probably shouldn’t wait until that time since people with mild visual loss are being affected by their condition.”

Less than one percent of the volunteers were blind or had severely limited vision, while 23 percent had limited vision in one or both eyes. Dr. Radeep Ramulu, an associate professor of ophthalmology at Johns Hopkins University School of Medicine, said “poor vision may reflect eye disease, the need for glasses, or the need for better glasses” for these people.

Roughly three percent of participants were in the mid-range around the legal threshold for driving, meaning they could drive but still experienced some difficulties associated with poor vision in their everyday life.

Ramulu suggests regular eye checkups can help reduce the risk of these problems. The researcher also stressed the need for greater access to annual eye exams.

A study has found that persons suffering from vision impairment are twice as likely to develop depression, compared to those with normal vision. Dr. Michael Ascher, a clinical associate professor of psychiatry in Penn’s Perelman School of Medicine, said, “What we are talking about is not new, but has never been a focus of the psychiatric community. We want to use our observations to begin the dialogue.”

Vision problems can be a secondary effect of psychiatric treatments. Some antidepressants may lead to blurred vision, while selective serotonin reuptake inhibitors (SSRIs) may cause the pupils to dilate, impairing the vision quality.

Dr. Ascher added, “Depressed patients are less likely to follow up with medical treatment or make lifestyle modifications to limit visual loss, like quitting smoking or cutting down on drinking, or making an effort to exercise. As clinicians, we need to ask the questions to identify these issues before the patient’s health is further compromised and complete vision loss sets in, and the patient’s depression potentially worsens. Untreated depression or family support issues can obstruct treatment for more serious illnesses.”

Dr. Ascher and his team came up with the following recommendations for their fellow medical professionals. Speak to blind and low-vision patients when they enter the clinic, greet them at the door and escort them by allowing them to grasp your elbow, describe the room and continue to talk to the patient even if they don’t directly look at you.

Ascher further added, “In lieu of a family member or outside support, this often falls to the clinician. For example, many low-vision patients rely on their sense of touch to identify their medications. If a generic is substituted by the pharmacy, it could lead to confusion and potentially harmful consequences for the patient.”