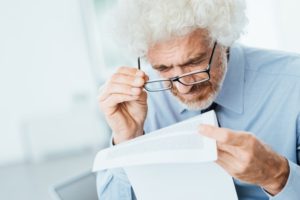 Vision loss and suffering an injury from a slip and fall are two things nearly everyone fears about getting older. New research suggests that the two are related – the findings of a new study claim that with worsening vision, your risk of a slip and fall increase significantly.

As 1 out of every 11 Americans over the age of 65 suffers from visual impairment, these findings offer important safety information for the elderly. Due to the expected increase in the elderly population over the next several decades, understanding the health risks affecting citizens in this age category is now more important than ever.

To do just that, the researchers behind the current study analyzed data gathered by the National Health and Aging Trends Study (NHATS). In particular, they looked at the frequency of falls among respondents to the study about health conditions including visual impairment.

They also examined how fear of falling limited activities in this group. For the sake of the study, “fall” was defined as any fall, slip, or trip that caused a person to lose their balance and land on the ground or surface below them.

The researchers asked participants if they had experienced a fall in the last month and within the last year. They were also asked if they had previously experienced any worry or concern about falling over the last 12 months and whether they had limited their activities as a result of the fear.

The results clearly showed that participants with a visual impairment were both more likely to have experienced a fall in the last year and been concerned about the possibility of experiencing a fall than those without visual impairment.

This population of participants was also more likely to have limited their activities after experiencing a fall or out of fear of falling. Nearly 50 percent of those with visual impairments reported that after they had suffered a fall and had limited their activities as a result. Approximately 25 percent of people over the age of 65 with visual impairment reported experienced more than one fall within the last 12 months.
“We need more information about falls and the fear of falling in older adults with vision problems. This will help us design public health and clinical interventions to address some of the key consequences of vision loss for older adults,” said study coauthor Joshua Ehrlich.

The researchers remind readers that most forms of visual impairment can be prevented or treated beyond the point of prevention to decrease their effects. They believe that decreasing the rate of falls among older adults is critical to maintain the quality of life, independence, and well-being among this population. Limiting visual impairment is an important step in lowering the rate at which older adults experience injuries due to slipping and falls. This should be considered a public health concern, according to the researchers, and interventions created in order to prevent it.