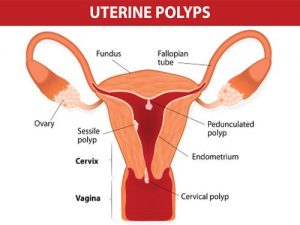 Uterine polyps are growths that form on the inner walls of the uterus. They may also be referred to as endometrial polyps, as the tissue lining the uterus is called the endometrium. These polyps are usually less than one centimeter in diameter and have the ability to flatten and conform to the shape of the uterus, but there are some cases where a polyp may grow larger than the size of a golf ball. Uterine polyps are generally considered non-cancerous, however, there are some conditions where a polyp may become cancerous.

They are attached to cell wall lining via a stock and usually stay within a confined area., however, sometimes they grow long enough to slip down into the vagina.

Uterine polyps may be confused with another intrauterine condition called fibroids. This condition is instead characterized by the accumulation of thick muscle tissue within the uterine walls. This is an important distinction when discussing uterine polyps vs. fibroids.

Women between the ages of 40 and 50 years old are more likely to develop uterine polyps. However, they can occur after menopause and rarely show up in women younger than 20. It is believed that women who are overweight, obese, have high blood pressure, or are taking a drug to treat breast cancer called tamoxifen have an increased chance of developing uterine polyps.

What are the symptoms of uterine polyps (endometrial polyps)?

Many women with uterine polyps may not experience any symptoms at all. But if they do, the following are the most commonly observed:

Abnormal vaginal bleeding: This is the most common symptom experienced by women with uterine polyps. Their periods are often heavier than normal, they may have spotting between periods, and may experience bleeding after intercourse if the polyp is particularly large. Additional signs are bleeding after menopause and having irregular periods.

Having abnormal vaginal bleeding should prompt women to seek medical attention right away. Studies have shown that post-menopausal symptomatic women have the highest risk of having polyps containing precancer or cancerous cells. However, less than one percent of uterine polyps turn out to be malignant.

Vaginal discharge: Uterine polyps may cause watery, bloodstained discharge to be excreted from the vagina. Discharge can become foul smelling as well.

Cramping: Particularly large polyps may push down into the cervical canal, causing discomfort and cramping. These protruding growths can be seen during routine pelvic examinations by a gynecologist.

Infertility: Uterine polyps have been found to affect fertility in some women. Researchers from the Aristotle University of Thessaloniki, Greece followed 83 women with uterine polyps who were diagnosed with primary or secondary infertility. They found that by removing the polyps via polypectomy, menstrual patterns were regulated in 92 percent of women and pregnancy rates increased to 61 percent.

Excessive estrogen: This is supported due in part to the fact that uterine polyps are rarely diagnosed before menarche (a female’s first period) when there isn’t much estrogen being produced. Also, it is well known that being overweight or obese causes excess estrogen production through fat cells, which may lead to polyp development. Tamoxifen, a hormone medication designed to interfere with estrogen levels in the body, has been linked a 30 to 60 percent increase uterine polyp development.

Estrogen is thought to over stimulate the uterine wall, leading to the proliferation of endometrial tissue and subsequent polyp development. It is also known that increased exposure to excessive estrogen can cause polyp size to increase.

Age: Incidence of uterine polyps increases with age and predominantly occurs in perimenopausal (transition period towards menopause) women between the ages of 40 and 50. This is thought to be because hormones fluctuate severely during this period.

Chronic inflammation: This is an immune response of the body to a perceived or real foreign invader. Inflammation often causes the affected site to become red and swollen. It is generally viewed as the body trying to fight off an infection and heal itself. However, having inflammation for a long period of time can slowly start to damage healthy organs and tissue. It is believed that long-standing, uncontrolled inflammation of the walls of the uterus can lead to the development of polyps.

High blood pressure: Also known as hypertension, this condition is considered a risk factor for polyp development. However, one study published in the American Journal of Obstetrics and Gynecology did not find an association.

How are uterine polyps diagnosed?

Having irregular periods or other abnormalities involving the menstrual system will often be the first problem leading women to seek medical attention. Your doctor will get a full medical and menstrual history which will often include questions like how long do your periods last and how often do you have them?

Next will be a gynecological exam, which will involve looking into the vaginal cavity for any abnormity. The following additional tests may also be ordered:

Transvaginal ultrasound: A slim handheld device that is inserted into the vagina, emitting sound waves. It works very much like a traditional ultrasound test but can provide a better image of the structures within the uterine cavity due to its location.

Sonohysterography: The use of sterile fluid through a catheter is used to expand the uterus, helping to provide a clearer image of any growths within the uterine cavity.

Hysteroscopy: A procedure that can be used to diagnose or treat uterine polyps. It is done by inserting a long tube with a lighted telescope on the end of it (hysteroscopy) through the vagina and cervix into the uterus. This test allows physicians to examine the inside of the uterus and can be performed in combination with polyp removal surgery.

Endometrial biopsy: Using a soft plastic instrument, a small piece of the polyp is removed to be examined for cancer cells

Curettage: A long metal instrument used to collect tissue from the inner walls of the uterus. It is a small loop that allows physicians to scrape tissue or polyps.

Once the tissue is obtained, it can be sent for laboratory testing. Curettage can be used for diagnosis as well as treatment of uterine polyps.


How are uterine polyps treated?

Treatment will depend on several factors and if the polyps are symptomatic. Generally, if a polyp is causing heavy bleeding during menstrual periods or is suspected of being precancerous or cancerous, it should be removed. Polyps causing infertility or discovered after menopause should also be treated. If a uterine polyp does not cause any symptoms, no treatment is required.

The following are some methods for treating uterine polyps:

Medication: This includes progestins or gonadotropin-releasing hormone agonists, as they help to regulate hormone balance. However, they are only a temporary measure, as symptoms often return when stopped.

Hysteroscopy: Can be used to remove polyps with the aid of a special grasping device used to snag the polyp.

Curettage: Can be used to scrape the uterine lining and remove any polyps. This method is effective for removing smaller polyps.

Surgical removal: If none of the previously mentioned methods are effective, or if the polyps are found to be cancerous, more invasive measures for treatment are warranted. This includes performing a hysterectomy, whereby the entire uterus.

Unfortunately, there is no way to prevent uterine polyps, but you can do your best to catch them before they become a problem. It is recommended to have regular gynecological checkups and to reduce risk factors such as obesity and high blood pressure.