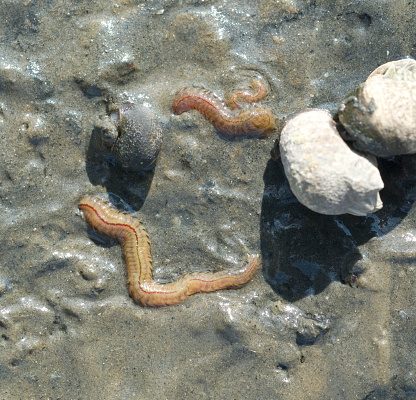 Worms are not normally thought of as the most useful creatures on the planet—we mostly just use them as bait. The lugworm (Arenicola marina) is slimy, deep pink, and not fit for human consumption—it hasn’t really provided much in terms of usefulness for humans. That is until now.

French researchers have discovered that the lugworm has an extraordinary ability that could transform medicine as we know it. The blood of the lugworm has the ability to load up with oxygen—the molecule needed for every tissue in the body.

Worm blood could prove to be a viable blood substitute. It could potentially save countless lives, speed up recovery times post-surgery, and even help organ transplant patients.

“The hemoglobin of the lugworm can transport 40 times more oxygen from the lungs to tissues than human hemoglobin.

It also has the advantage of being compatible with all blood types,” says Gregory Raymond, a biologist at Aquastream, a fish-farming facility on the Brittany coastline.

Medical potential of a worm

The lugworm garnered medical interest in as early as 2003, but it had never been studied. The researchers began their own study without having any parameters regarding how to proceed. Instead, they had to learn as they went.
Lugworms have the ability to survive in extreme conditions. When exposed to conditions that have very little oxygen. their hemoglobin stocks up on an astonishing amount of oxygen, allowing it to survive more than eight hours out of the water.


The main hindrance to using the blood of the lugworm as an alternative to human blood is the possibility of it causing an allergic reaction and potentially causing kidney damage. One of its main advantages, however, is that lugworm hemoglobin is almost the same as human hemoglobin and doesn’t need to be contained within red blood cells. This making differing blood types inconsequential.

Initial studies led the researchers to extract and purify lugworm hemoglobin, testing how well the substance works in mouse models. The rodents were found to adapt well, with no signs of immune response seen in other animal studies.

As of 2015, clinical trials began, with the blood being used in 10 human kidney transplant patients. An additional 60 participants are currently enrolled in the study across France. While there is some time left before the researchers get definitive answers on safety and effectiveness of the lugworm blood, the initial signs look promising.