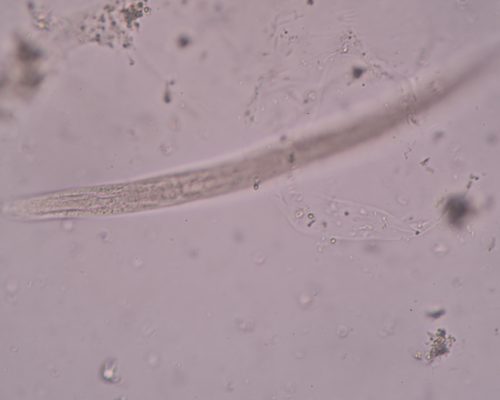 Inflammatory bowel disease (IBD) treatment with parasitic worms shows promise in a study. The research suggests that strategically placing parasitic worms could change the bacterial balance in the gut, this way overpowering the harmful inflammation-inducing organisms.

The study adds to the piling evidence to suggest that excessive sterility and cleanliness could actually be harmful. The hygiene hypothesis – which was first introduced in 1989 – suggests that being exposed to a limited number of germs is actually beneficial to our immune systems and helps the body fight off infection.

The team of researchers bred mice carrying genes associated with IBD and other immune conditions and injected them with juvenile whipworms. When the worms matured, the mice were found to have reduced levels of Bacteroides bacteria that cause inflammation and increased levels of Clostridia bacteria that combat inflammation.

The researchers extended the study to include 75 persons from rural Malaysia known to have high rates of worm infection but low rates of IBD.

They compared that data from 20 people living in urbanized Malaysia and found a reduced bacteroides count.

Study investigator Ken Cadwell said, “Our study could change how scientists and physicians think about treating IBD. Patient testimonials and anecdotes lead many to think that worms directly cure IBD, while in reality, they act on the gut bacteria thought to cause the disease.”

With further research, these findings could lend themselves to improved treatments for IBD, as it is estimated that the condition affects 1.4 million Americans. The new treatment may also help with other autoimmune conditions, including rheumatoid arthritis and type 1 diabetes.


Other treatment options for IBD

In the case of IBD, the reliable course of treatment is to address either the inflammation or the immune response. This can be done either by antibiotics or immunosuppressants (or immunomodulators), which prevent the immune system from attacking the bowel and causing inflammation.

Crohn’s disease, a type of IBD, has a long list of treatment methods because it does not have an exact cause to target. Treatment for Crohn’s disease may include corticosteroids, anti-inflammatory drugs, immunosuppressant agents, antibiotics, biologic agents, nutritional and dietary counseling, stress management, and, in severe cases, surgery to remove heavily affected areas of the intestines and colon.

Treatment for ulcerative colitis, another IBD, can involve drug therapy, surgery, or in mild cases, lifestyle changes.
In some instances, medications are prescribed to help reduce inflammation. Reducing the inflammation can minimize both abdominal cramps and diarrhea. Serious inflammatory bowel disease cases may require antibiotics or other medications to alter immune function.

When symptoms of ulcerative colitis are severe, hospitalization may be necessary. Oftentimes, severe cases lead to dehydration and malnutrition. Severe symptoms could be a sign of a perforated colon or even cancer. Surgery may be required.

There are two surgical options. One, called aprotocolectomy, involves removal of the entire colon and rectum. The other involves removal of part of the colon. This is called ileonal anastomosis. When aprotocolectomy is performed, a surgeon makes a small opening in the abdominal wall to bring the tip of the lower small intestine through the skin’s surface. Waste is then drained through the opening into a bag. With the ileonal anastomosis, feces can still pass through the rectum since the rectum is intact, but the movements will be frequent and watery.

If ulcerative colitis goes undiagnosed and untreated, inflammation can spread, causing problems with other organs and potentially leading to cancer, so proper care and treatment are vital.