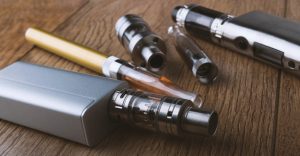 More and more people are either swapping traditional cigarettes for e-cigarettes or simply picking up an e-cigarette habit, causing this trend to grow in popularity.

The appeal of e-cigarettes is that people believe them to be healthier than traditional cigarettes, but even e-cigarettes contain nicotine and other chemicals. Furthermore, e-cigarettes come in a wide variety of flavors to appeal to the masses.

Specifically looking at flavors, researchers took a closer look and uncovered that e-cigarette flavors can pose a risk to your arteries and heart.

The researchers exposed endothelial cells – cells which line the arteries – to a variety of e-cigarette flavors. They tested a variety of dosages and concentrations of nine popular flavors: banana, butter, cinnamon, clove, eucalyptus, mint, strawberry, vanilla, and “burnt” which is like a popcorn or tobacco flavoring.

At high concentrations, all the flavors were found to damage the cells. Vanilla, mint, clove, and burnt were found to impair nitric oxide production.

Study author Jessica Fetterman explained, “The loss of nitric oxide is important because it has been associated with heart disease outcomes like heart attacks and strokes. It is one of the first changes we observe in the blood vessels in the progression to heart disease and serves as an early indicator of toxicity. Our study suggests that the flavoring additives, on their own in the absence of the other combustion products or components, cause cardiovascular injury.”

Even when nicotine was absent, the lungs are still exposed to flavoring chemicals, which can cause damage.

The researchers tested both smoker and non-smoker cells. Smoker cells already had damage to them, causing a reduction in nitric oxide production. Non-smokers production of nitric oxide was impaired once exposed to the different flavors.

Several studies have pointed to the fact that vaping isn’t a safer alternative to smoking traditional cigarettes, as it’s harder for persons to determine the level of chemicals in e-cigarettes. More research is still needed to better understand the harmful effects of e-cigarettes, but smoking of any kind should be avoided for optimal health.