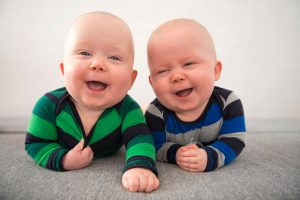 Although there have been fewer incidences of sudden infant death syndrome since the “Back to Sleep” campaign and an increase in recommendations from medical practitioners to place sleeping babies on their backs, there have been higher than normal levels of infants that develop a positional plagiocephaly.

A positional plagiocephaly is a flattening on one side of the infant’s head, usually due to being placed in the same sleeping position night after night. The external pressure from the sleeping surface causes a one-sided molding to occur in the skull. This condition is often treated with the use of helmet therapy when the infant is very young.

A new study published in the official medical journal of the American Society of Plastic Surgeons (ASPS) has found that starting helmet treatment for skull flattening before 24 weeks of age has greater results than if the therapy is started later in the infant’s life. The researchers behind the study claim that two key factors in determining the potential success rate for the therapy are the age at which therapy begins and the severity of the positional plagiocephaly.

The study followed 144 infants who underwent helmet therapy, also known as molding orthosis. The participants were separated into groups based on age (before 24 weeks, between 24 and 32 weeks and 32 weeks or later) and severity of plagiocephaly (mild-to-moderate or moderate-to-severe). The success of the treatment was determined by the remaining symmetry of the skull.

The helmet therapy was successful in all three groups based on age, but the study found a higher level of success the younger the infant was when they started the therapy. For the mild-to-moderate severity group, there was an 83 percent success rate in those younger than 24 weeks, a 69 percent success rate for those between 24 and 32 weeks, and a 42 percent success rate for those older than 32 weeks. The same decrease was found in patients with moderate-to-severe plagiocephalies, lowering from 50 percent to 30 percent down to 7 percent as the age at which the infant began the treatment increased.

There has previously been debate as to when the ideal time to begin helmet therapy is. It is one of the foremost recommended treatments for a positional plagiocephaly and is generally performed after physical therapy and active positioning. There have been few studies on helmet therapy that have focused on the ages of the participants, however.

The researchers of this study hope that these results will be taken into consideration when medical practitioners are determining the age at which to begin helmet therapy. For mild cases, the therapy should be started early on if other treatments are not working, and for severe cases, it should be started immediately after diagnosis. The results of the study are clear that the earlier the therapy is started, the higher chance it’ll succeed.

Related: Unique traits in children should be used to their advantage