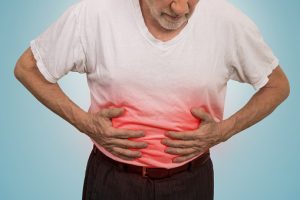 Knowing how to get rid of trapped gas is something we can all appreciate, as it may help save us from a potentially embarrassing moment. Having trapped gas is a very common problem and affects all of us at some point, with others having this problem on a daily basis. Gas pains are often accompanied by uncomfortable bowel sounds emanating from our intestinal track that often make use think we need to find a bathroom right away or need to covertly pass some gas without anyone noticing.

Intestinal gas builds up in the digestive tract of every human being. Gas is just one of the products of food being broken down and digested, often leading to burping, belching, or flatulence. A person can produce about one to three pints of gas each day, which can lead you to pass gas through the anus 14 to 23 times in a single day. Certain medical conditions may promote you to be more susceptible to producing gassy symptoms, but in the majority of cases, it often is the result of eating gas producing foods.

Trapped gas treatment: How to get rid of trapped gas

How to get rid of trapped gas naturally?

Dietary modifications to get rid of trapped gas pain

Lifestyle modifications to get rid of trapped gas pain

Home remedies to get rid of trapped gas pain

Warm lemon water: Being careful not to scald yourself, drinking warm lemon water can be a quick way to help get rid of gas immediately. The warm of the water may help to help soothe the digestive tract, getting rid of stomach pains. Lemon water also helps to detoxify the entire body.

Peppermint tea: Peppermint has been widely known for helping to settle the stomach and relieve gas quickly. Those suffering from chronic gas related issue may also find that the use peppermint can reduce symptoms during all times of the day. Peppermint contains properties laced with methanol which can have an antispasmodic effect. This can help calm the intestinal muscles involved in releasing gas.

Chamomile tea: A great option for relieving trapped gas if you are not a fan of peppermint. Chamomile also has antispasmodic properties which help in relaxing gastrointestinal muscles and even helping to relieve gas from indigestion and heartburn

Dandelion tea: A great alternative to the previously mentioned teas as it also helps in treating trapped gas pain. Dandelion has also been known to be used as a spice.

Caraway seeds: Also known as Kala jeera, this seed can be made into a tat to help with the healing of gastric disorders. This can be done by adding one teaspoon of caraway seeds to one cup of boiling water, letting it steep for a few minutes, then drinking it. caraway seed eat is best consumed before lunch or dinner.

Pumpkin: Can help in decreasing the amount of gas produced in the intestinal tract. Pumpkin is quite a versatile food as it can be baked, broiled, and steamed making a welcome compliment to any dish,

Cloves: Eating a few raw pieces can help relieve gas pain almost immediately. While the taste of cloves may be too pungent for some, clove oil may be a suitable alternative. Clovers are great for relieving bloating and gas pain in the stomach.

Anise seed: This seed has antispasmodic properties which help to relax the digestive system and reduce pain. It also has the added ability in aiding in the expulsion of accumulated gas, relieving bloating.

Buttermilk: Helps to heal gastric problems as well as keeping the gastrointestinal track fit and healthy. Freshly churned buttermilk is one of the best remedies for curing indigestion

Black pepper: A food having historical roots stemming from ancient India, black pepper can be a great choice for the treatment of acidity and indigestion. The properties of black pepper help with increasing stomach acid which can help with digestion. To effectively treat gastric irritation, take powdered black pepper with jaggery. Black pepper can also be used in combination with butter milk for synergistic effects

Asafoetida: A type of dried gum/latex derived from the root of a perennial herb, asafoetida can be added to some water and taken three times a day for trapped gas relief. It can also be mashed into bananas and consumed that way.

Cardamom: A commonly used spice in many dishes, cardamom can be easily incorporated while cooking vegetables or rice. You can even chew raw cardamom pods two to three times a day to help relieve gassy issues. Drinking it as part of a tea may also be beneficial. To do this, prepare fresh ginger, a few cardamom pods, and a teaspoon of fennel seeds. Let the mixture steep, then drink as many times a day as desired.

Fennel: Chewing on the seeds of this flowering plant can provide instant relief for trapped wind. Fennel can also be consumed by making it into a tea.

Apple cider vinegar: Can help soothe an upset stomach, it is best consumed after mixing with a warm glass of water.
Cinnamon: Having a bounty of medical applications, cinnamon can also help in relieving gas pain. Start by adding a teaspoon of cinnamon powder in a cup of warm milk, then add some honey. Now stir and drink. You can also make a cinnamon tea to help relieve gastric troubles

Baking soda and lemon: The combination of these two ingredients provide relief from gas pain. It is advised to stir in baking soda until fully dissolved before drinking.

Carom seeds: A long-used home remedy that is used in curing nausea, indigestion, and other gastric problems, it can also be used to treat trapped gas. Crush about a half-teaspoon on carom seeds and mix with salt and asafetida, then chew and swallow it with a glass of water.

Guava leaves: Can help relieve bloating and other digestive problems by first boiling the leaves and drinking the mixture once cooled.

Activated charcoal: A common emergency treatment used to prevent drug overdose or poisoning, activated charcoal can also be found in tablet form in your local pharmacy. Taking them right before and one hour after meals can effectively reduce gas buildup.

Coconut water: A great source of electrolytes including protein, coconut water can provide relief for gas pain as well. You can drink coconut water on a regular basis to help reap its beneficial effects.

Having trapped gas can be very uncomfortable, often making us more irritated and unable to concentrate. By following the recommendations outlined in this article, you can be sure you have given trapped gas treatment your best shot. If you are still experiencing trapped gas symptoms, it may be time to visit your doctor to get an expert opinion.

Related: Yoga and sleeping positions to relieve gas and bloating

How to get rid of smelly gas fast? Smelly flatulence causes and cures