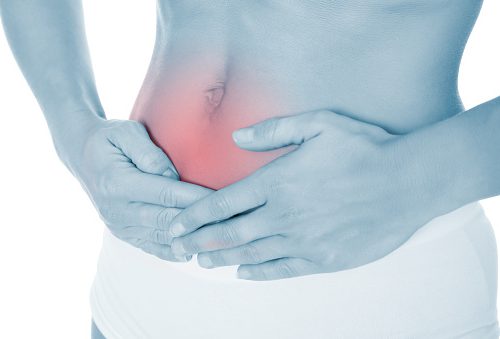 Having trapped gas creates a feeling of being bloated or having stomach pain that is due to gas build-up within the intestinal tract. It can be quite an embarrassing problem and make us feel uncomfortable and irritable. Gas can be relieved in one of two ways, by either belching or flatulating. Neither of these is socially acceptable and are often considered bad manners.

A person can produce about one to three pints of gas each day, which can lead you to pass gas through the anus 14 to 23 times in a single day. Certain medical conditions can promote more gassy symptoms, but in the majority of cases, increased gas is the result of eating gas producing foods.

What are the causes and risk factors of trapped gas?

Our digestive tract is a corrosive and emulsifying system that begins with our mouths and ends with our anus. Its purpose is to break down the foods we eat to extract the vital minerals and nutrients. Unfortunately, during this breakdown, several gas compounds such as oxygen, hydrogen, and methane are released and built up, producing gassy pain until it is eventually released.

Part of the process of food digestion occurs in the colon, which harbors many different kinds of bacteria to aid in the breakdown of food. Bacteria in the gut, albeit helpful, can be one of the biggest contributors to gas formation. High fiber foods such as fruits, vegetables, and whole grains are great producers of gas, as the gut bacteria have more solids to exhibit their effect on. While fiber is great for the digestive process as a whole, it often comes with the tradeoff of producing more gas.

Swallowing excessive amounts of air is also a big contributor to gas production and often goes unnoticed by the individual. Every time we eat or drink, we are also swallowing air that goes into our digestive tract. Chewing gum, using straws, or simply eating very quickly will increase the amount of air swallowed, which can only be released again by belching or by flatulence.

A medical condition called lactose intolerance is a very common cause of an upset stomach and excess gas production. Those affected have an inability to break down a type of natural sugar called lactose, commonly found in dairy products such as milk and yogurt. Consumption of dairy can lead to abdominal cramps, bloating, and diarrhea. Another condition is gluten intolerance, which can cause similar symptoms but is due to an inability to metabolize a substance found in wheat.

Other medical conditions leading to excessive gas production include diverticulitis, inflammatory bowel disease (Crohn’s disease or Ulcerative Colitis), and even diabetes, which can cause bacterial overgrowth in the small intestine.

Constipation is a condition where you have difficulty emptying your bowels. This can lead to the trapping of gas within the intestinal tract, causing discomfort and bloating. It isn’t until the constipation is alleviated that these symptoms will go away.

Other causes of trapped gas include:

Depending on the underlying cause of your trapped gas, your symptoms may vary. However, in the majority of trapped gas cases, the following symptoms are present:

Serious symptoms that accompany trapped gas may include:

Because trapped gas can occur due to many different types of medical conditions, obtaining a full and detailed patient history is vital for identifying any unusual associated symptoms. Your doctor will likely review dietary habits, how often you experience symptoms, and look for the serious symptoms previously mentioned. After this is completed, a physical exam involving inspection, auscultation, and palpation of the stomach will be done to get a more direct interpretation of the goings on in the digestive tract.

If your doctor suspects a more serious condition, additional tests will be ordered to get a better idea of the current status of the digestive tract. This includes the use of x-rays or CT scans (computed tomography), both of which can help diagnose intestinal obstruction.

Be active and avoid unnecessary stress: Regular exercise helps to move the muscles of the abdomen and subsequently the muscles of the gastrointestinal tract. Exercise is a great way to help your body relieve gas faster and more quickly, reducing pain that is often associated with it. Exercise can simply be walking or a light jog, which can be done anywhere. Yoga is another type of exercise that can help relieve gas quickly and effectively. Regular exercise can also help you relieve stress, making you less likely to engage in bad habits such as smoking and eating junk food. It will also help you maintain a proper sleep pattern.

Foods to avoid: Foods containing high amounts of fiber. These include beans, peas, oats, barley, passion fruit, figs, bananas, broccoli, cabbage, cauliflower, onions, artichokes, and sweet potatoes. If you are lactose intolerant, it is advised to avoid all dairy. Artificial sweetener found in many gums and soft drinks such as sorbitol and mannitol can also cause excessive gas and should be avoided. Additionally, any trigger foods such as alcohol, caffeine, and fried foods should be cut out of your diet.

Foods to eat: Try to eat more insoluble fibers if you are feeling constipated, which can be found in whole grain bread and green vegetables. However, it is important to note that some individuals with irritable bowel syndrome may not tolerate isolable fiber well. It is also a good idea to drink a lot of water, as it helps promote digestion and soft stools.

Probiotics: Products that promote the growth of helpful bacteria in the gut. By eating probiotic yogurts or taking pill supplements, you can prevent bloating and constipation.

Having trapped gas can be very discomforting and can even lead to some embarrassing situations if relieved in public. By following the recommendations outlined and making an effort to prevent the causes of trapped gas, you will give yourself the best chance for avoiding many awkward – gas related – situations.

Related: 23 natural remedies to get rid of gas immediately

Yoga and sleeping positions to relieve gas and bloating

7 reasons for your bloating, gas, and constipation