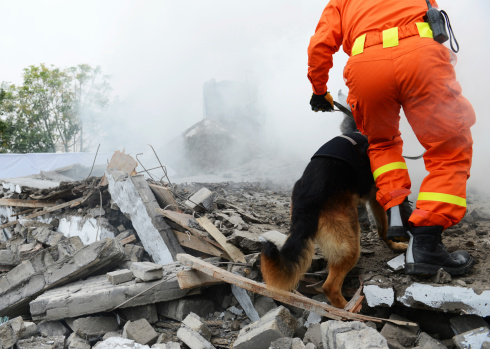 In emergency situations, you want responders to be able to act quickly and efficiently, and be highly functional. This includes animals that make up a part of the rescue team. Recently, it has been found that the transportation of search and rescue dogs to rescue sites can cause added stress.

After spending millions on developing technologies to replace search and rescue dogs, a more effective option has yet to be created. Thus, it is vitally important that the health of these dogs is maintained in order for them to continue to function at a high level and. This is why researchers at Southern Illinois University have put so much effort into finding ways to better manage the levels of stress these dogs are exposed to.

A team of researchers from the University of Illinois, along with animal handlers with the Department of Homeland Security, have joined forces to better understand the causes of this added stress during transportation and how it can be rectified. Similar to humans, air travel causes more stress to some dogs than others. Whether or not they have been on flights before, some of the rescue dogs will still exhibit stress-induced behaviors, such as a raised body temperature and diarrhea.

The researchers speculated that the reason behind these physiological responses is the same as it would be with any household pet. There are changes happening in the gut microbiome that is causing the dogs’ stool to become looser under stress. The researchers speculate that the stress is also causing the dogs to have a more permeable gut lining, which, combined with the bad microbes that thrive in stress environments, is causing diarrhea.

As part of their research, the team conducted a compare-and-contrast experiment. The search and rescue dogs were divided up and taken on two different kinds of flights. The first group was flown in the cabin on a commercial airline for 2.5 hours, while the other was “hot loaded” onto a helicopter for a 30-minute flight to a sight.

The flight on the helicopter showed raised body temperatures and a spike of the stress hormone cortisol, but no changes in the microbiome of the dogs’ guts. There were changes to the gut microbiome of the dogs who went through the more “traditional-to-humans” flight path: entering through the airport, passing security, and taking a commercial flight. These dogs showed “greater relative abundances of Clostridia and Bacteroidaceae populations, two of the more predominant microbial groups in the gastrointestinal tract.”

The researchers say that further study is needed in order to fully understand the long-term effects that these microbes, released during travel, might have on the dogs. Ultimately though, after each group reached the rescue sights, they all performed at the same high level of functionality despite the obvious stress responses displayed during transportation. For now, the dogs’ continued ability to function normally is what matters most in emergency situations.