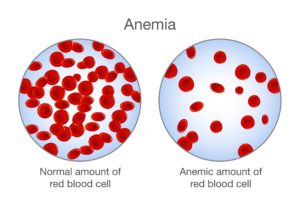 Ringing in the ears – also known as tinnitus – is an annoying condition where you constantly hear buzzing, ringing, or other noises. Furthermore, these noises may seem louder during times when your environment is quieter, such as when you’re falling asleep. This can make it more of a nuisance.

Anemia is a condition where a person is deficient in iron. Iron is essential because it helps with the production of red blood cells. Being anemic can lead to health complications if left untreated, as it poses risks to the heart and lungs.

Researchers aren’t entirely sure why anemia triggers tinnitus, but there have been several reports of patients with iron deficiencies complaining of whoosting, bussing, and ringing in the ears.

If you have been living with ringing in the ears but also note other listed symptoms related to anemia, then your tinnitus may be caused by a lack of iron, which is treatable once diagnosed.

Anemia can be caused due to injuries, surgeries, chronic blood loss, pregnancy, menstruation, and breastfeeding. Being vegetarian or vegan can also put you at risk for anemia. This is why it’s so important that vegans and vegetarians supplement their diet correctly.

Detecting anemia is as simple as running some blood work. Once diagnosed, your doctor can determine the severity of the anemia and offer a treatment method. You may find that once you begin treating your anemia, the ringing in the ears subsides.