Home » Weight Management » Exercise » The Prescription that Could Save Your Life 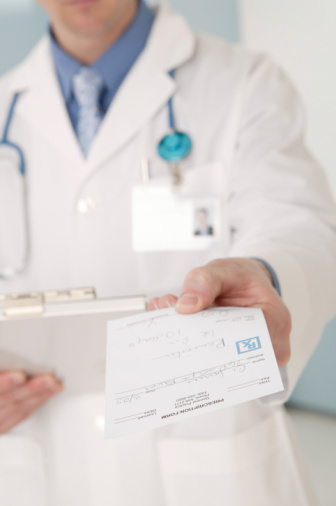 Many of us have come to automatically expect the appearance of that familiar white prescription pad at the end of a doctor’s visit, receiving it’s authoritative promise of healing and health with a sigh of relief. Some medical analysts estimate that American doctors write over four billion drug prescriptions each year. And with the power of “the prescription” reigning supreme in our hearts and in our minds, doctors are beginning to wield their prescription pads for a very different cause, which is nevertheless just as critical when it comes to good health. More and more people are leaving the doctor’s office with an official prescription to exercise.

Doctors have always been telling their patients to get more exercise; however, recognition of the need to turn this oft ignored advice into a firm and formal instruction has led to the development of detailed exercise prescriptions. And the change in patient response has been considerable  – family physicians report that patients seem to follow the authority that is linked to the prescription pad.  They explain that if someone tells you to be more active, it is easy to brush it off; but if it is written down and prescribed, it seems you are more likely to follow through.

Exercise and your Health

The health benefits of exercise have been scientifically proven and repeated countless times. Being physically active helps prevent stroke, diabetes, metabolic syndrome, joint problems, depression, and certain kinds of cancer. It also promotes better sleep which can do wonders for your health. If you are already suffering from an illness or disease, exercise can help in the prevention of increasing the severity of symptoms or help to eliminate problems associated with obesity altogether.

Hitting the Gym for Treatment

In Edmonton, Alberta, a group of doctors have been handing out “Get Active” prescriptions for over a year. They say patients generally follow these instructions as a treatment for their particular problem. So far, about two hundred patients have stuck to the prescriptions and joined a local recreation center while others are committed to working out at home.

They use cardiac patients as an example to demonstrate the effectiveness of exercise. Their data reveals that people living with heart disease who exercise regularly have a 50 percent lower chance of dying than cardiac patients who don’t exercise.

Inactivity is a Killer

Just prior to the 2012 Olympics, a report published in the Lancet revealed that one-third of adults are not exercising enough. The report suggests this inactivity is causing millions of deaths every year and that this should be considered a “pandemic”. Researchers involved in the report are calling on the medical community to find ways to warn people about inactivity rather than occasionally reminding them about the benefits of exercise. They recommend that adults do 150 minutes of moderate exercise each week. The research team published their report close to the Olympics to send a message to the world; to be more than just spectators but participators in activity.

The Move Towards Exercise Prescriptions

While encouraging exercise is something medical professionals have done for years, the idea of officially prescribing physical fitness is relatively new. The Canadian Doctors aren’t taking full credit for the concept though. They were inspired by research conducted in New Zealand where medical reports show doctors’ prescriptions for exercise can increase physical activity in adults by 10 percent.

New Zealand now has a treatment system called “Green Prescription” or GRx.  In essence, a doctor will write a prescription for exercise on a green notepad or issue the prescription electronically. If the patient wants ongoing support, the prescription is forwarded to a GRx support staff member. The support staff member then encourages and motivates the patient through phone calls, face-to-face meetings, and group support sessions. The patient’s progress is then reported back to the doctor. Today, over 80 percent of doctors in New Zealand use “Green Prescriptions” with their patients. Ultimately, this new practice of prescribing exercise can significantly improve patients’ lives, and may even reduce the amount of unnecessary prescription drugs.