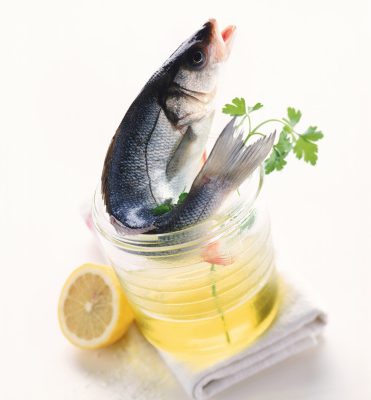 Fish belongs in the category of foods that make you  smarter. But, according to a brand new study, it also  belongs in the brain protection category. Because people  who eat fish, cooked in these two ways, may be reducing  their risk of Alzheimer’s disease.

Researchers found that people who eat baked or broiled  fish every week can boost their brain health and lower their  risk of Alzheimer’s and mild cognitive impairment (MCI).

It is believed to be the first ever study to directly link fish  consumption with brain structure and Alzheimer’s risk. Just  one serving of fish a week (lower than the generally  recommended amount of two) led to better preservation of  gray matter in the brain areas where Alzheimer’s disease  tends to strike.

Alzheimer’s is an incurable, progressive brain disease that  slowly destroys memory and cognitive skills. More than five million Americans may have it. In MCI, memory loss  is present but to a lesser extent than in Alzheimer’s disease. But MCI often leads to Alzheimer’s disease.

So, to that study. Researchers took 260 healthy adults and gathered information on fish consumption. Of them, 163  ate fish on a weekly basis; the majority one to four times per week. The researchers then tried to determine if preserved gray matter linked with fish consumption reduced Alzheimer’s risk. When gray matter volume is  higher, the brain is stronger,  healthier.

So, they found that consuming baked or broiled fish was  positively associated with gray matter volumes in three key areas of the brain. It reduced the risk for MCI or  Alzheimer’s by almost five-fold.

Essentially, the fish promotes stronger neurons in the brain’s gray matter by making them larger and healthier.  The results also demonstrated increased levels of cognition  in people who ate the fish. This included working memory,  which allows people to focus on tasks and commit  information to short-term memory. Working memory is  destroyed by Alzheimer’s. But people who ate fish each  week had higher levels of working memory.