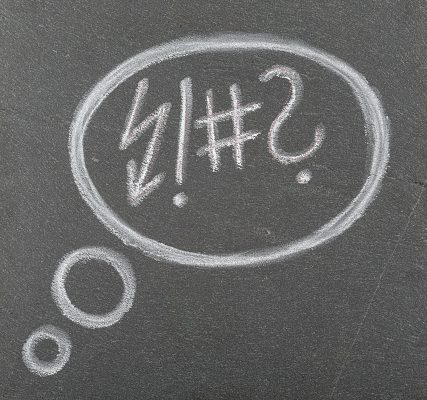 Bad words are something of a taboo in society. They are bleeped from television, unprofessional in the workplace, and impolite. These words have negative meanings attached to them and we often use them to make others feel bad. But according to a new study, swearing can relieve physical and social pain when used in a particular context.

We have all accidentally burned our skin or banged our toe, leading to an immediate exclamation of pain in the form of a swear word. This has proven to reduce the immediate pain to a slight degree. It’s now been shown to reduce “short-term social distress”—the kind stemming from emotional pain that occurs from quarrels with a significant other or being excluded from a social situation.

The theory is that saying swear words aloud is part of a cathartic healing process, helping to dilute the intensity of pain, possibly by distraction.

While previous studies have already made a correlation between the use of swear words and their ability to reduce pain, this is the first to investigate whether it can alleviate social distress.
The study in question involved 70 participants who were split into two groups. The participants were asked to write down an inclusive or distressing social event to help induce those corresponding emotions. Either group was assigned a swear word or a non-swear to say aloud. Each was then tested for feelings of social pain and sensitivity to physical pain.

The researchers warn that using swear words too often or when not in significant distress can weaken this observed effect. When used sparingly, their healing properties can be beneficial. Also, swearing shouldn’t be viewed as an easy remedy for serious pain, abuse, or trauma, and clinical care should be sought in these cases.