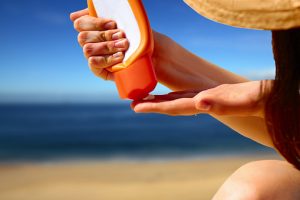 Sunscreen is a necessity when it comes to having fun in the sun. It helps to prevent premature aging, it protects us against the suns harmful UVB rays—known for trigging skin disorders and even causing cancer—and according to new research, applying sun screen can even inhibit the symptoms of multiple sclerosis.

Researchers from the University of Wisconsin have found that applying sunscreen to mice with multiple sclerosis-like conditions helps to dissipate symptoms of the condition.

In humans, multiple sclerosis is an autoimmune disorder that leads to demyelinating nerve damage. The nerves of the central nervous system—responsible for sending and receiving signals to and from the brain to aid in control and function of virtually any part of the body—are covered in a protected layer called myelin. In multiple sclerosis (MS), this layer is attacked by the body’s own immune system for unknown reasons. Symptoms often include problems with vision, muscle movement, and coordination. Currently, there is no cure for MS.

Completely by accident, the researchers at the University of Wisconsin found that chemicals in certain types of sun screen actually help reduce MS symptoms. Their initial experiment investigated the possibility of using one or more wavelengths of light to reduce MS symptoms, but they found that the sunscreen mice used in their control group showed signs of symptom reduction rather than their original experimentation.


The study was set up to evaluate mice by first inducing an MS-like condition onto them. Their backs were shaved to allow for sunscreen and light exposure.

They were intrigued that the sunscreen mice were doing better than their prepared treatment tests, and they turned to investigate this discovery further by looking at the ingredients that might have caused this reduction in symptoms.

Two key sunscreen ingredients were found to play a role in MS symptom reduction in mice: they were ctisalate and homosalate. The researchers say that it is possible these two substances may be causing the mice to produce less cyclooxygenase—a commonly found MS lesion enzyme.

At this point in time, the researchers are not quite sure how these two compounds work, together or otherwise, in reducing multiple sclerosis symptoms. While having a positive effect in mice is a great result, it is still uncertain if this will translate well during human trials. However, the researchers are quite optimistic.