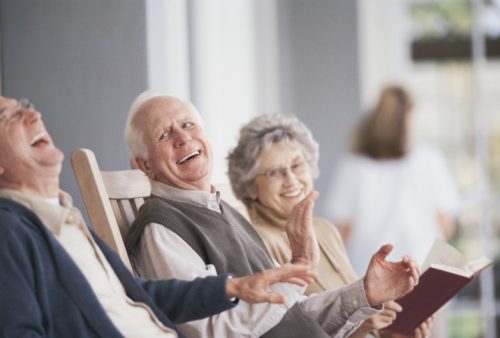 Dementia is a mental health condition that is quickly becoming a major health concern around the world.  Approximately 35.6 million people suffer from the disease worldwide and 7.7 million new cases are diagnosed each year, according to the World Health Organization (WHO).  Dementia involves a deterioration of memory, thinking, and behavior.  And eventually, it interferes with the ability to carry out simple, everyday tasks.  It is a leading cause of disability and dependency in older adults.  Not only does dementia affect the person suffering from the disease, it also impacts families and caregivers physically, emotionally and financially. At the present time, there is no cure for dementia, but many treatments can be offered to patients suffering from this mental health condition.  Research recently published in BMJ Open investigated humor therapy as a possible treatment option to offer to nursing home residents suffering from this debilitating mental health condition.

Humor Therapy as a Possible Treatment for Mental Health Conditions

Humor is a basic form of social play which we learn as children.  It has many psychosocial benefits such as encouraging positive emotions which help individuals improve problem solving and memory function.  Additionally, humor can encourage social communication, social influence and bonding as well as helping to relieve tension and anxiety.  Humor therapy involves using humor to encourage laughter and happiness. Researchers from the Sydney Multisite Intervention of LaughterBosses and ElderClowns (SMILE) study wanted to determine if humor therapy could reduce depression, agitation, and behavioral disturbances while improving social engagement and quality of life in nursing home residents with dementia.

398 residents from 35 nursing homes in the Sydney area were included in the current study. 187 residents received the intervention treatment involving 9 – 12 weekly humor sessions presented by “ElderClowns” with trained staff known as “LaughterBosses” also being present to engage residents in the humor sessions.  The elderclowns specifically personalized their interactions with the participants to enhance participant engagement, laughter and enjoyment.  The elderclowns adapted their behavior to suit the background, personality, mood and physical and cognitive ability of the participant during the sessions. The control group, which consisted of 209 residents, received their usual care within the nursing home.

The results of the study showed that humor therapy did not affect depression, social engagement or quality of life of dementia patients in the nursing homes.   However, humor therapy was shown to reduce agitation levels in the intervention group at the 13-week and 26-week follow ups when compared to the control group that received their usual care.  The researchers conclude that prior to starting dementia patients on prescription medication for agitation, treatment with humor therapy should be attempted as it doesn’t carry any of the risks of traditional medicinal options that are commonly prescribed to mental health patients.