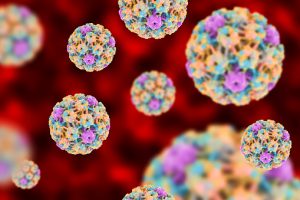 The most common sexually transmitted infection is not herpes or HIV, but rather another type of viral infection called HPV or human papillomavirus virus. This infection doesn’t typically present with any symptoms but has the potential to develop into cancer.

There are over 200 different types of HPV with some infections increasing the risk of cancer of the cervix, vulva, vagina, penis, anus, mouth, or throat. Generally, it is believed that the body is able to fight off reinfection through the creation of antibodies made during the initial infection.

However, according to a new study, no natural immunity to genital human papillomavirus in men was found, suggesting that there is still a high chance that the same virus type can reinfect men within the same year. This news promotes the importance that vaccination of the virus plays, especially in males.

“Vaccinating boys before HPV exposure could be a highly effective way to reduce the burden of HPV infection. Vaccinating men who have already been infected might also be effective,” said Sylvia Ranjeva, a Ph.D. student in the University of Chicago Department of Ecology and Evolution and the Pritzker School of Medicine, who led the study.

HPV is the most common sexually transmitted infection with approximately 40 percent of women and 45 percent of men affected in the U.S. In addition to causing several types of cancer, HPV is also a major cause of genital warts. A vaccine now exists for both males and females, helping to protect against the HPV types directly related to the disease.

The researchers of this study tracked more than 4,000 unvaccinated men from three cities in Florida, Mexico, and Brazil over a five-year period. Data was gathered to help understand what allows so many different types of HPV to coexist.


The result of their analysis showed that HPV does not behave competitively with other forms of the virus, but instead, it maintains its diversity among other HPV types by re-infecting individuals more than once.

A high rate of reinfection found

It is currently estimated that nearly half of the adult population carries at least one type of genital HPV, making the overall prevalence of this virus very high. It is believed that the high-risk of reinfection may be either due to reactivation of a latent virus or spreading of the infection by repeated contact between two different sites (auto-inoculation).

“That’s what makes this a biologically significant result. The best thing we can do is prevent the initial infection by vaccinating boys before sexual contact. However, if the increased risk of reinfection is due to auto-inoculation, then another effective strategy may be to vaccinate previously infected men as well,” Ranjeva said.

STDs (chlamydia, syphilis, and gonorrhea) on the rise in USA: CDC

Simple lifestyle changes that add years to your life