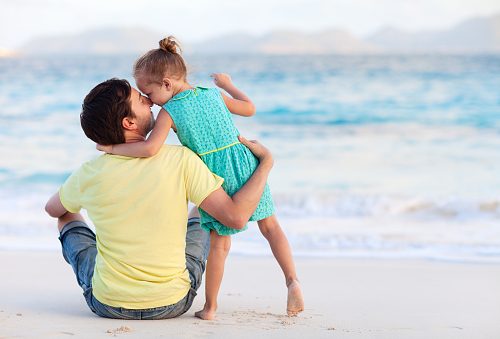 Those who grew up with a sibling of the opposite sex may tell you that their parents treated them differently. Girls are usually treated more delicately while boys are treated rougher. According to a new psychological study, father’s brains respond differently when interacting with daughters versus sons.

A study from Emory University and the University of Arizona found that fathers were more responsive and attentive to the needs of toddler daughters compared to toddler sons. Fathers were more open about emotions and even sang more often to their daughters. According to the researchers, this is possibly due to them being more accepting of female feelings than males.

Fathers were more “rough and tumble” with their sons and used more achievement-related language like “proud” and “win.” When talking to their daughters, however, more analytical language was used, like “all” and “much.”

The study in question involved real-world scenarios to help avoid any biases in the results. Data from 52 fathers of toddlers, 30 girls and 22 boys, from the Atlanta area was collected. Participants agreed to clip a small handheld computer onto their belts and wear it for one weekday and one weekend day. This device randomly turned on for 50 seconds every nine minutes to record sound during a 48-hour period.

The fathers also underwent functional MRI scans that helped demonstrate various brain changes. During these scans, the men were shown photos of an unknown adult, an unknown child, and their own child with a happy, sad, or neutral facial expression.

The greatest response was seen when they were shown photos of their daughter’s happy faces, and it was seen in areas of the brain that are important for visual processing, reward, emotion regulation, and face processing. While the faces of sons did illicit a response, it was very different than what was seen for daughters. Fathers responded more robustly to their son’s neutral facial expressions. No differences were seen when viewing the sad facial expression of both sons and daughters.

The researchers chose to investigate fathers and their relationships with their children because little information about this relationship exists. While they do admit that no long-term connections could be concluded, it did provide some links to possible behavioral outcomes.

“The fact that fathers may actually be less attentive to the emotional needs of boys, perhaps despite their best intentions, is important to recognize,” said lead researcher Jennifer Mascaro of Emory University.