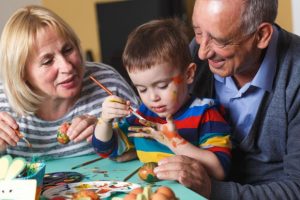 The saying goes something like this: intelligence is knowing that a tomato is a fruit, but wisdom is knowing not to put it in your fruit salad. Wisdom is the abundance of experience and knowledge that manifests as good judgement, patience, and kind-heartedness, and the elderly are chock-full of wisdom. However, according to a new study, many grandparents who are tasked with raising their grandchildren practice outdated parenting myths that can potentially harm young children—not very wise.

It is estimated that in 2012, more than seven million grandchildren in the United States were being raised solely by one or both grandparents, totaling about 2.7 million elderly individuals. These children were separated from their parents for a few reasons: a growing opioid epidemic, parental incarceration, or problems with parents’ physical or mental health, according to the senior investigator of the study Andrew Adesman.

“When grandparents step up to the plate, it can be wonderful for grandchildren but can also pose challenges in terms of lifestyle, finances and mental and physical health to a somewhat older or elderly cohort. In their questionnaires, a fairly large sample size of grandparents felt they were doing a good job but acknowledged they didn’t have the support they often needed and that their role could be alienating in terms of their own peer group,” said Dr. Adesman.

The researchers carried out their study by giving 636 grandparents a detailed questionnaire. What they found was that many of their child-rearing beliefs from when they raised their own children remained stagnant. A lot of grandparents are seemingly unaware of new practices and are unknowingly threatening their grandchildren’s safety by sticking to their old ways. It was found that 44 percent of participants taking the questionnaire believed that “ice baths” were a good way to bring down a high fever, not knowing that the practice poses a significant risk for developing hyperthermia. Nearly 25 percent of grandparents also didn’t know that infants should be put to sleep on their backs and not on their stomach—a risk factor for developing sudden infant death syndrome (SIDS).
“It’s important that pediatricians not make the mistake of taking for granted that because these grandparents have raised children already, they have the wisdom of the ages,” said Dr. Adesman.
Children were not the only ones at a disadvantage though, as two other related studies surveying 774 grandparents conducted by the same research team found that one in ten grandparents who identified as the primary caregiver of one or more grandchildren reported that they did not have any support systems, and 12 percent stating that their support system didn’t meet their most important needs. However, what perhaps is more detrimental is that 71 percent of all who participated in these two studies reported that due to the responsibilities put on them, they had limited ability to socialize with friends, with nearly 40 percent feeling that their emotional state is affected and about 32 percent saying it affected their physical health.

“Although the grandparents often elected to take on this role, it’s not something they planned for and it can represent a challenge in many domains. Many grandparents are up to the challenge, but it may come with certain costs,” said Dr. Adesman.