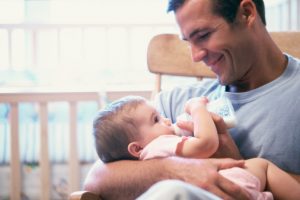 Research from the Novo Nordisk Foundation Center for Basic Metabolic Research has revealed that what your father ate prior to you being born could have a large influence on your overall health. The researchers examined sperm cells of 13 lean and 10 obese men and found that there are different epigenetic marks that could affect the next generation’s appetite.

Researchers also followed six men prior to and one year after undergoing gastric bypass surgery to uncover what effects it would have on epigenetic marks in their sperm. The researchers observed over 4,000 structural changes to sperm DNA before and after the surgery.

Associate Professor, Dr. Romain Barrès, said, “We certainly need to further examine the meaning of these differences; yet, this is early evidence that sperm carries information about a man’s weight. And our results imply that weight loss in fathers may influence the eating behavior or their future children.”

“Epidemiological observations revealed that acute nutritional stress, e.g. famine, in one generation can increase the risk of developing diabetes in the following generations,” Dr. Barrès explained. One study that he referenced showed that the availability of food during a famine correlated with the risk of grandchildren developing cardiometabolic diseases.

The researchers detected differences in RNA expressions and DNA methylation patterns, which showed that weight loss can change epigenetic information of sperm and means it could potentially lead to physiological changes in a future embryo.

“We did not expect to see such important changes in epigenetic information due to environmental pressure. Discovering that lifestyle and environmental factors, such as a person’s nutritional state, can shape the information in our gametes and thereby modify the eating behavior of the next generation is, to my mind, an important find,” Dr. Barrès added.

“Today, we know that children born to obese fathers are predisposed to developing obesity later in life, regardless of their mother’s weight. It’s another critical piece of information that informs us about the very real need to look at the pre-conception health of fathers. And it’s a message we need to disseminate in society,” explained Ida Donkin, lead author.

“The study raises awareness about the importance of lifestyle factors, particularly our diet, prior to conception. The way we eat and our level of physical activity before we conceive may be important to our future children’s health and development,” added co-first author Soetkin Versteyhe.