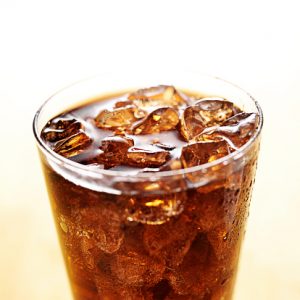 Don’t let the term “diet” in diet soda fool you; diet soda can still lead to weight gain. A new study looked at the dietary habits of over 22,000 Americans and concluded that, to compensate for the drop in calories from a diet beverage, people tend to overeat other food items that often contain more sugar, sodium, fat and cholesterol.

Professor Ruopeng An, Ph.D., from the University of Illinois examined 10 years of data where participants were asked to document everything they had eaten and drank over the span of two days.

An found that 90 percent of participants ate discretionary food, meaning it had no nutritional value and the body does not require it. This led to consuming 482 calories daily.

Alcohol was responsible for the majority of extra calories consumed, then sugar-sweetened beverages, followed by coffee, diet beverages and tea.

Even though coffee and diet-beverage drinkers ranked toward the bottom of extra calories consumed, these individuals ate more discretionary food which An suggests is a compensation effect.

An said, “It may be that people who consume diet beverages feel justified in eating more, so they reach for a muffin or a bag of chips. Or perhaps, in order to feel satisfied, they feel compelled to eat more of these high-calorie foods.” Another theory suggests people opt for diet beverages as a way to compensate for the unhealthy foods they already consumed.

Additionally, findings uncovered that those who consumed sugar-sweetened beverages or coffee also had the worst nutritional profiles. Furthermore, switching to diet beverages is not a solution to weight gain; it will lead to over-consumption of calories if people are not mindful.

An concluded, “If people simply substitute diet beverages for sugar-sweetened beverages, it may not have the intended effect because they may just eat those calories rather than drink them. We’d recommend that people carefully document their caloric intake from both beverages and discretionary foods because both of these add calories – and possibly weight – to the body.”

The findings will be published in the upcoming Journal of the Academy of Nutrition and Dietics.

Also read: Soda ban rejected for NYC: So soft drinks are good for you?
Source:
http://www.eurekalert.org/pub_releases/2015-09/uoia-dbd091015.php