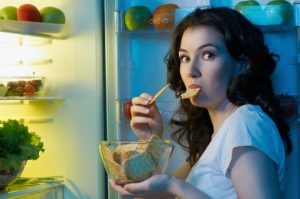 As with other habits of questionable health value, there’s something special about eating late at night. Cooking at midnight in a dimly lit kitchen while the entire house is asleep, then sitting at the table with just a little light on enjoying the results of your culinary alchemy… there’s definitely something magic about it, wouldn’t you agree?

Or, perhaps you’re enjoying your weekend, and as there’s no early wake-up call the next morning, you’re staying up late binge-watching your favorite TV show. It’s going great until it’s way past midnight and your hunger pangs drive you to the kitchen. Who doesn’t like late-night snacking?

Alas, all these fun experiences come with a cost, and the cost is much higher than a price of a meal at a restaurant during regular business hours. Eating late at night promotes weight gain along with rising levels of insulin and cholesterol.

Late-night meals are bad for your cholesterol

A recent study, scheduled to be presented at SLEEP 2017—the annual meeting of the Associated Professional Sleep Societies in Boston, MA—looked into the impact of regular late eating on one’s metabolism. Nine participants with a healthy weight had to go through a daytime eating phase for eight weeks and then a delayed eating phase for another eight weeks. Daytime eating involved having three meals and two snacks between 8 a.m. and 7 p.m. In delayed eating, those same three meals and two snacks were eaten between noon and 11 p.m.

To avoid carry-over effect, there was a two-week washout break between the two phases.

The results definitely didn’t favor nocturnal munching, which inevitably led to weight gain in study participants. Their respiratory quotient increased as well during that phase. This is the ratio of carbon dioxide produced by the body to oxygen used by the body, and it’s an indication of macronutrient metabolism. Rising respiratory quotient means that fewer lipids and more carbs were burned after having a late meal.

Rising levels of insulin, fasting glucose, triglyceride levels, and, of course, cholesterol were also part of the delayed eating aftermath.
The researchers suggest eating the last meal of the day before 7 p.m. can promote better health, while an earlier eating schedule, in general, may help avoid overeating at night.

And as if that’s not enough, here are a few additional perks to eating your dinner around sunset.

Less digestive troubles. Midnight munching can leave you bloated and suffering heartburn because there’s less of a break between your last meal and your bedtime. Your stomach doesn’t have enough time to process food before you hit the pillow, so the acid gets refluxed into the esophagus. This doesn’t happen when you eat early enough to digest your last meal properly before you assume horizontal position.

Better sleep. Nighttime digestive troubles can disturb your sleep, as you’re waking up often in the middle of the night.

System reset. With early dinner, your brain and other organs have time to focus on recharging themselves for the next day instead of spending the remainder of your energy reserves solely on digestion.

With proper meal planning, it shouldn’t be hard for you to switch to an earlier eating schedule. Definitely try those sunset dinners—there hasn’t been invented a more romantic way to improve your cholesterol levels.

Surprising ways to lower your cholesterol

Eat your way to lower cholesterol