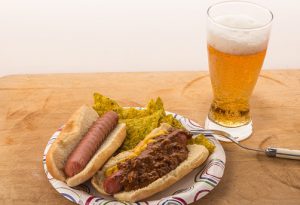 The findings come from the American Institute for Cancer Research and the World Cancer Research Fund. The researchers suggest that one in seven stomach cancer cases can be prevented if people stick to less than three alcoholic beverages a day, avoid processed meat, and maintain a healthy weight. The researchers note that these measures would prevent up to 4,000 stomach cancer cases a year.
Alice Bender, head of nutrition programs at the cancer institute said, “This is the first report to find strong evidence of these links. There are things we can do to lower our risk for cancer. There are choices we make every day that can make a difference.”

Findings from the report included:

Every year, there are up to one million new stomach cancer cases worldwide, making it the fifth most common cancer. Survival rate in stomach cancer is 25 to 28 percent, as it is generally caught at the later stages when symptoms begin to occur. Men typically are more likely to develop stomach cancer, compared to women, and the average age of diagnosis is 72 years.

By following current cancer-prevention guidelines of cutting your alcohol intake to one or two drinks a day and limiting processed meats, you can lower your risk of stomach cancer. Essentially, partaking in healthy lifestyle habits can reduce your overall cancer risk.