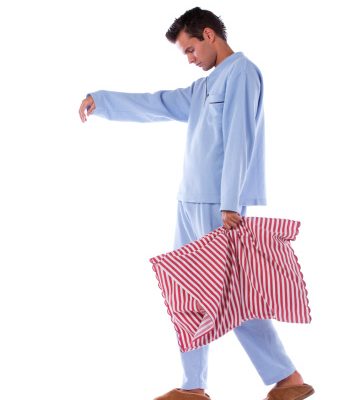 Sleepwalking, also known as somnambulism, is considered as the main cause of most sleep-related injuries.  Unfortunately, research efforts in the last 50 years has left several questions regarding sleepwalking unanswered, especially in terms of its actual causes.

One of the major misconceptions about sleepwalking is that it is a benign disorder, in which minor effects result from this condition. More recent reports have now shown that somnambulism is associated with adverse events, including placing one’s self within harm’s way and inflicting injuries to one’s bed partner.

According to a recent medical report published in Lancet Neurology, an increasing number of reports related to sleepwalking involve violent behaviors and these events do not occur while an individual was sleeping, but as soon as the person wakes up.  An alarmingly high number of legal cases have also been filed in court involving sleep-related acts of violence.  Other forms of extremely aggressive behavior during sleepwalking include offensive driving of a motor vehicle, suicide, and homicide.


Sleep Problems That Even Effect Children

The report explained that sleepwalking was often observed among children and thus the related actions of these young individuals were considered non-violent or benign.  In addition, these benign episodes were so common that it was previously considered to a safe enough not to seek medical intervention.  The Lancet Neurology report showed that 3% of toddlers experience sleepwalking, and this prevalence increases among 7- to 8-year-olds, at 11%.  By age 10, approximately 13–15% of children experience these forms of sleep problems.  Medical reports have shown that once these children grow older, the occurrence of somnambulism disappears.

Continuing Sleepwalking as an Adult

However, the recent medical report also shows that approximately 25% of children who experience sleep problems continue to sleepwalk as adults.  The actual cause of this continuity into adulthood remains unclear.  Furthermore, the report also explains that some adults may also start sleepwalking, even without any history of this problem during their childhood.

The researchers of this Lancet Neurology study discussed that 25% of adult sleepwalkers also experience anxiety and other forms of mood disorders, which are often associated with insomnia.  This condition of difficulty in sleeping or staying asleep may also be harmful to one’s health because it reduces the capacity of the body to rest.  More importantly, insomnia decreases the opportunity for the brain to processes information and events that have occurred during the day.  Most people struggling with insomnia thus show a reduction in quality of performance at work or at school because they lack the necessary rest during the evening.  Other people experiencing insomnia may be working on the night-shift and thus this may also cause disturbances to their circadian rhythm.  Insomnia has also been strongly associated with major medical disorders including obesity, diabetes, and cardiovascular conditions.  Insomnia has also played a role in accidents related to operating motor vehicles and machines.

The Root Cause of Sleepwalking – Anxiety

The recent medical report postulates that sleepwalking might be caused by anxiety.  In the case of children, separation anxiety may be the major cause of these forms of sleep problems.  On the other hand, adults face higher degrees of stress at work and at school, which are highly likely to cause insomnia and eventually other forms of sleep problems.

RELATED READING: Sleep Problems Could Be Ruining Your Relationship

It is quite alarming to know that 80% of sleepwalkers have at least another family member who is affected by the same condition.  In addition, children with parents that sleepwalk are more likely to experience the same medical disorder.  The report stated that having a sleepwalking parent increases the risk by ten-fold among their children.

The information provided by the recent medical report provides useful information that would help readers in understanding the conditions and consequences of somnambulism.  Although insomnia, stress, anxiety, and family history are associated with this condition, additional research is still needed for design of effective diagnostic and treatment schemes for this sleep disorder.