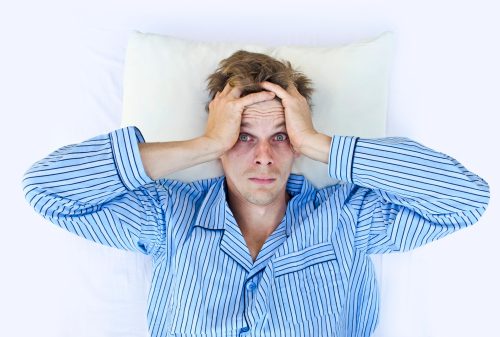 New research published in Nature Genetics has discovered a genetic link between sleep disturbance and medical conditions such as restless leg syndrome, schizophrenia, and obesity. The study examined the biological mechanisms that control insomnia, the duration of sleep, and excessive daytime drowsiness. They also looked at how they related to the medical and life histories of approximately 112,000 volunteers.

The participants reported how long they slept, the degree of insomnia experienced, and the degree of daytime sleepiness they had. The genes of each participant were then mapped, and additional information—weight and disease diagnoses—were collected. Using this information, researchers were able to identify the specific areas of the genome that are linked with sleep disturbances like insomnia and excessive daytime sleepiness, as well as genetic associations with restless leg syndrome, schizophrenia, and obesity. The strongest relationship with symptoms of insomnia was found within a gene that was previously associated with restless leg syndrome. Genetic links were also discovered between sleeping longer and the risk of developing schizophrenia, as well as between excessive daytime sleepiness and obesity.
The study was led by Dr. Jacqueline Lane, a post-doctoral fellow at Massachusetts General Hospital; Dr. Richa Saxena, an assistant professor of anesthesia at MGH and Harvard Medical School; and Dr. Martin K. Rutter of the University of Manchester. In regards to their results, Rutter commented “This clinical science is an important step forwards in understanding the biological basis for these conditions; so it’s very exciting. Scientists have long observed a connection between sleep disorders and these conditions in epidemiological studies. But this is the first time these biological links have been discovered at a molecular level.” The discovery of genetic links between sleep disturbances and other medical conditions may open the door for an alternate route of treatment, targeted specifically at the genomes involved. While more research must be conducted in order to better understand these relationships, the results are promising and could aid scientists in developing new ways to prevent or slow these conditions.