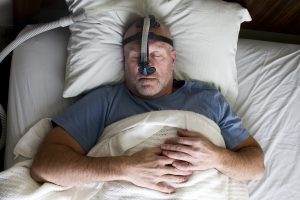 Researcher Glen Foster explained, “While it is well established that sleep apnea is linked to high blood pressure, our study shows this condition has an impact on the cardiovascular system that can begin within a single day. After just six hours of fluctuating oxygen levels, similar to what happens with sleep apnea, the body’s ability to regulate blood pressure is impaired. These changes occurred almost immediately in healthy young adults who were not experiencing the cumulative effects years of sleep apnea could bring about.”

The researchers looked at 10 young healthy adults and evaluated the effects of intermittent hypoxia (decreased oxygen levels) on the circulatory system. Patients wore a ventilating mask, which mimicked varying oxygen levels as seen in sleep apnea.

Foster concluded, “These findings suggest that interventions for people suffering sleep apnea should occur as soon as the condition is diagnosed.”

The study had participants use a CPAP device for 12 weeks. The researchers saw reductions in diastolic blood pressure and improvement in overall nighttime blood pressure.

The researchers suggest that patients with drug-resistant hypertension should undergo sleep tests to rule out obstructive sleep apnea as a potential cause.

Dr. Gregg Fonarow, a spokesman for the American Heart Association, added, “Close to three out of four patients with resistant [high blood pressure] have been found to have obstructive sleep apnea, and this sleep apnea may contribute to the difficulty to control the blood pressure in these patients.”

Sleep apnea is a condition in which a person stops breathing throughout the night. Not only does sleep apnea contribute to high blood pressure, but it can lead to daytime fatigue, and even headaches and jaw pain. A CPAP device is an effective mode of treatment for sleep apnea, but there are also lifestyle habits that can further help to treat sleep apnea.

For example, sleep apnea is more common among individuals who are overweight or obese. Maintaining a healthy weight can help treat sleep apnea. Additionally, regular exercise can help aid in the symptoms of sleep apnea.

Reducing your alcohol intake or the use of sleep aids can also improve sleep apnea, as they both work as sedatives and tranquilizers, allowing the muscles in the back of the throat to relax, which can contribute to sleep apnea.

Another trick is to avoid sleeping on your back and opt for your side instead.

Lastly, do not smoke and try to keep your nasal passages open throughout the night. Smoking has been found to worsen sleep apnea, and a saline nasal spray can help open up nasal passages.