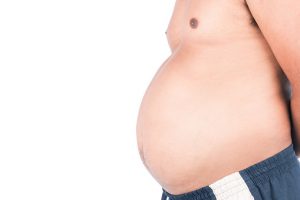 The common perception is that those who are skinny are healthier than those who are fat. This makes the most sense, as those who exercise and eat a well-balanced diet tend to be leaner. While this is true for the most part, there are people who look thin but are actually fat from a metabolic standpoint. You probably know people who eat terribly yet seem to never gain weight, but according to new research, they are metabolically obese and may suffer from high cholesterol, high blood pressure, or even diabetes. These individuals are more accurately termed “skinny-fat.”

When a person sees a professional football player or even a sumo wrestler, they often appear big and burly, with excess amounts of fat on their body. But paradoxically, these are some of the healthiest individuals you will ever meet. This extra layer of fat tissue serves as a protective layer rather than being a reflection of their eating habits. These athletes eat and train for the sake of their careers, making their hearts strong.

The discrepancy lies in the type of fat being accumulated. There are two main types found in the human body: subcutaneous and visceral. The former is the type of fat that commonly lies beneath the skin, while the latter is located deep in your abdomen and surrounds your organs.

Normally, most people have a 90:10 split between subcutaneous and visceral fat respectively. However, those who are “skinny fat” have this ratio in disproportion.

A skinny-fat individual has a higher risk of death than their visually obese counterparts, according to previously done studies.


Excess visceral fat can be reversed

There is some good news, however, as visceral fat can be quickly reduced through diet and exercise. In a study where participants exercised between 15 to 20 hours per week, cardio, strength training, and high-intensity exercise groups all saw a significant loss in visceral fat.

All of the three groups lost weight, but those who lifted heavier weights or jogged at higher intensities saw the best results.

It is important to recognize that despite how a person looks, their metabolic standing may be entirely different.
The clearest indicator of being skinny fat seems to be having extra fat around the waistline, giving the appearance of a “big gut” with skinny arms and legs. Fortunately, by eating right and being active, you can help keep your body metabolically in shape.

Stop your late-night eating with these tips

The Healthy Truth: Foods to eat for good health