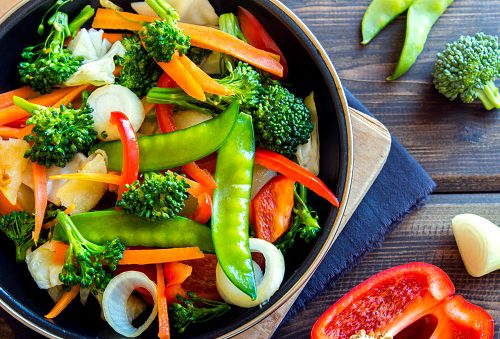 As we get older, staying fit becomes increasingly challenging. One way to manage your weight is by eating a healthy diet that provides us with an adequate number of calories we need. But what does it mean to eat a healthy diet? According to a new study, eating more fruits and vegetables cuts your risk of obesity by almost half.

While it may come as no surprise, as most vegetarians tend to be on a slimmer end of the spectrum, eating a primarily plant-based diet also promotes good health. The purpose of the study, however, was not to juxtapose vegetarians and non-vegetarians. Rather, it was to document the impact of reducing a number of animal foods consumed.

The study monitored over 16,000 healthy non-obese Spanish adults for an average of 10 years following university graduation. The participants documented their dietary habits using a point system. They received a point for every plant-based food eaten, and lost a point for every animal-based food eaten. Some staple foods of their diet included fruit, vegetables, and grains, as well as animal-derived products such as dairy, eggs, and meats.

Using the score-based system, the researchers places the participants into one of the five groups. The highest score group was more likely to eat a pro-vegetarian diet.

To make sure there were no outside factors influencing these the results, the researchers adjusted their data. They accounted for sex, age, alcohol consumption, family history of obesity, smoking, sleep duration, and physical activity.

The researchers do not believe that this observation implies a direct cause and effect. Rather, it is only an association. Obesity is linked to metabolic disease, heart disease, and even early death. If choosing to eat more plant-based food in lieu of animal-based ones will help decrease this risk, it should definitely be considered.

Why it’s so important to eat fruits and vegetables